The Dragon with a Chocolate Heart by Stephanie Burgis 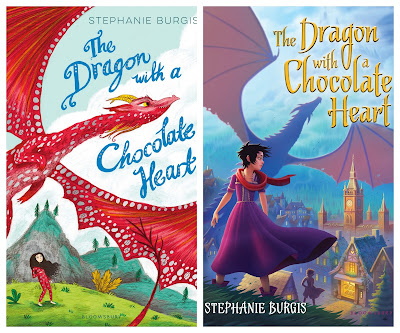 A little info about why I've posted two covers for my review of The Dragon with a Chocolate Heart:

1. The cover at left is the UK cover and the one I have. The book has already been released in the UK and I opted to order a copy from Book Depository, partly because I liked the UK cover better and partly because I wanted to go ahead and read it, rather than waiting for the American release. Having read the book, I can tell you that both illustrations fit the text. I do prefer a the lighter, more cheerful coloring of the UK cover, so I'm happy with my purchase.

2. The Dragon with a Chocolate Heart has not yet been released in the US but the release is coming, soon, so it's undoubtedly available for pre-order, although I haven't looked. The cover at right is the US version. Because I'm in the US, I thought it would be appropriate to include both covers - the UK version I've purchased and read and the US version that is soon to be released. UPDATE: The US release date is May 30!

The Dragon with a Chocolate Heart is the story of Aventurine, a young dragon whose scales have not yet hardened. Until a dragon's scales have hardened, it is not safe in the outside world and the hardening of scales takes many years. So, Aventurine is pretty much stuck in a cave perpetually and she's bored. Her siblings have discovered their passions and are perfectly happy in the cave, but Aventurine wants to see the world and is frustrated by her inability to leave.

When she gets the chance Aventurine escapes from the cave. She doesn't plan to stay outside long or get herself into trouble, but she encounters a food mage who gives her some enchanted chocolate and poof! she is transformed from dragon to human. Not only has she been tricked by a wily mage, she is also unable to return home. Dragons fear humans and know them to be a danger, although an angry dragon can clearly harm a human, as well. When one of her family members flies nearby, Aventurine gets a good sense of what it's like facing an angry dragon when he aims at her with his flaming breath. He will never believe she's really a part of his family.

With no other choice left to her, Aventurine goes into the nearest village in search of her new passion, chocolate, clothed in an outfit that looks like her former dragon scales. She's helped by a young thief, but can Aventurine trust her new friend? When she decides that she wants to become an apprentice to a chocolatier, will she be able to overcome rejection? Will any of the chocolatiers ever accept her? And, when dragons begin to swoop over the village, can Aventurine stop the villagers from killing her family? How will she ever convince her family that she's a human, now?

Recommended - What a creative story. Aventurine is a strong, fearless heroine who becomes a fish out of water when she's turned human. But, after discovering her passion, she goes for it. She is going to become a chocolatier and she is going to find a way to save the village and her family. You know it when each of these things are coming, but it's still a delight to find out how she'll accomplish everything she needs and desires to do. Although there were some portions that I thought dragged a bit, I enjoyed the friends Aventurine made along the way, her courage and determination, and the ending. The one thing that I thought was not obvious: Would Aventurine remain a human or find a way to transform back into a dragon? Would she be a dragon chocolatier? I'm not going to give that away but I will tell you I found the ending satisfying.

©2017 Nancy Horner. All rights reserved. If you are reading this post at a site other than Bookfoolery  or its RSS feed, you are reading a stolen feed. Email bookfoolery@gmail.com for written permission to reproduce text or photos.
Posted by Bookfool at 1:03 PM