We're All Damaged by Matthew Norman and a Fiona Friday pic 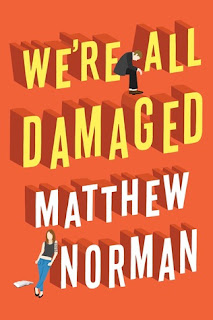 I've been failing at blogging and a lot of other things, this week, due to the overwhelmingness of life, so I'm going to review my most recent read because it's an easy one to talk about.

We're All Damaged is contemporary fiction about a man whose wife divorced him after she became involved with a paramedic. Andy was devastated and escaped to New York City after making a fool of himself at his former brother-in-law and best friend Neal's wedding. It's been nearly a year since he left, but now Andy's grandfather is close to death and his mother has called him home. Back in Omaha, Andy spends time with his grandfather and meets a mysterious, tattooed woman who claims she can help him recover from his divorce. He blindly trusts her advice while dealing with the fallout from his self-destruction at the wedding and trying to protect his right-wing, radio-host mother from the Glitter Mafia (although he's pretty much on their side), a group of gay men who are dedicated to giving her a hard time.

Once again, I had to peek at the reviews to see what exactly it was that the people who disliked this book had to say. Meh, nothing major. It's basically lad lit, the male verson of chick lit, and I think most of those who read the book thought it was in some way lesser to their favorite contemporary male authors. That didn't bother me because I wasn't comparing anyone to anything. The reason I ended up reading We're All Damaged, in fact, was the fact that I'd just finished reading No Man's Land, a book in which a young man faced the hardship of life in poverty and then on the front lines of WWI. I was specifically looking for something a little low on depth, something light-hearted and fun.

We're All Damaged was perfect for the moment. I didn't see anything on my shelves that appealed to me so it was a Kindle download (from a recent Kindle First promotion) that grabbed me, for once. You know how often I read e-books, right? Almost never. I set down my iPad and forget about them. A book has to really grab me and suck me in to get finished if it's in electronic form. And, the thing is, We're All Damaged made me laugh out loud that first night when I opened it. That was enough for me. I was definitely going to finish that e-book.

There are really only two negative things worth mentioning about We're All Damaged and one is not an original thought, but I'll save that for last. I was not thrilled with the heavy use of pop culture references. I tend not to be up on my pop culture and, yes, a lot of those references were unfamiliar to me. You need to know what the author is referring to in order to fully understand the meaning behind the use of  chosen references and I opted to just read between the lines -- I think I got out of it what he desired, but in a more oblique fashion and that was mostly because I didn't feel like looking anything up (my fault - feeling lazy). The second thing is only a realization thanks to one of the reviews I read. Yes, the mysterious, tattooed girl, Daisy, fits the "manic pixie girl" concept. She appears for no apparent reason, magically helps Andy understand and work through his problems, and . . . well, I won't tell you what happens but she definitely plays a magic poof role. Having said that, I don't care. I enjoyed the book and that's what counts. It was a 5-star read for me because it was perfect for the moment, I liked the storyline, loved the characters, and it made me happy while I was reading.

A favorite feature (of course): There's a stray cat that Andy occasionally cares for and feeds in the New York City scenes. Thumbs up for the =^..^= scenes, particularly the final one.

Highly recommended -  Save We're All Damaged for when you've read something heavy and your head is about to explode if you don't get a light-reading break. You may or may not fall in love with Matt Norman's sense of humor but the story is nice and light, a little slapstick, with a tiny touch of romance and a satisfying dash of redemption. Personally, I love the author's sense of humor. I pretty much smiled all the way through the book. 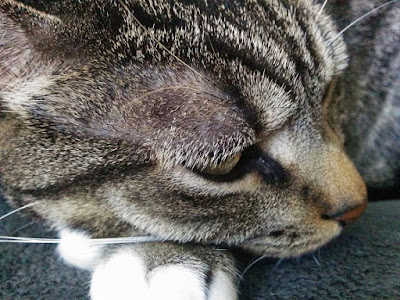 I've paired Fiona Friday with a review because I had such an incredibly busy week that I couldn't fathom not sneaking in a review while I have the time to write. Happy Weekend to all!

©2017 Nancy Horner. All rights reserved. If you are reading this post at a site other than Bookfoolery  or its RSS feed, you are reading a stolen feed. Email bookfoolery@gmail.com for written permission to reproduce text or photos.
Posted by Bookfool at 12:38 PM