Between You and Me by Susan Wiggs 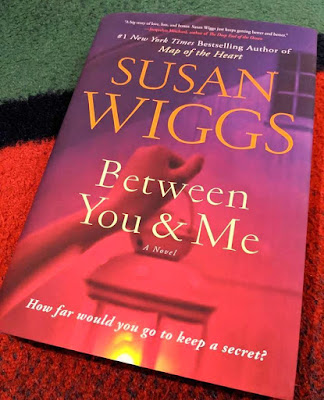 Caleb Stoltz is Amish. Although he once lived in the English world, he was called back when tragedy struck, his world rocked. Before his brother died, John asked for his two children to be raised Amish. More than anything, he wanted them to share his faith. Since then, Caleb has lived at home, raising his niece and nephew, Hannah and Jonah.

Reese Powell is a medical student whose parents are both physicians. For her entire life she's been groomed to become a pediatric surgeon so that she can add another dimension to her parents' medical practice. But, now that the Match to a residency program is upon her, Reese is having second thoughts about pediatric surgery, instead thinking she would enjoy the challenge of a medical specialty that draws on a wider variety of skills.

When Jonah is severely injured, Reese is on rotation in the Emergency Room at a Philadelphia hospital as the young boy arrives. His injury is severe and Reese is both drawn to Caleb and feels an unusual urge to help him because he appears so lost in her world. As Jonah begins his lengthy recovery and Caleb remains nearby, Reese gets to know him and falls for him. But, both are aware that their worlds clash and that being together may be impossible.

Between You and Me is an unusual read for me, since I don't often read romance and I've actively avoided books with Amish characters for quite some time. I read a few, maybe 10 years or so ago, and grew tired of them pretty quickly. This particular story isn't set entirely on Amish land, though. It's about the tension between the two worlds and two people who are both unsatisfied with their lives and yet feel compelled to continue on their chosen paths. Because it's clearly a romance, you can guess how it ends; it's the path to that ending that is interesting. How will the two characters work out their differences? Will both of them change their course? One of them? How will medical and legal complications, as well as a persistent family problem, effect the outcome?

Highly recommended to hopeless romantics - A sweet love story with likable characters, a number of dilemmas, and a heartwarming ending. I closed Between You and Me with happy tears in my eyes. While the prose isn't particularly brilliant, the characters are lovely, the dilemmas realistic. The "secret" noted on the cover is kind of dubious. I mean, I know what it is but I don't think it's as important to the plot as the fact that the two characters live in such different worlds and that secret may impact whether or not they will end up together. Just a lovely story.