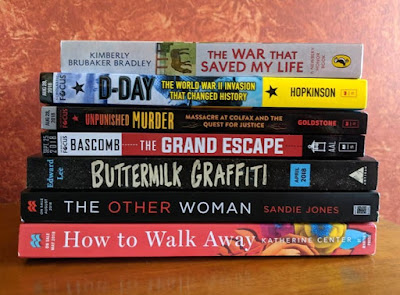 This always happens. I declare myself budget-conscious and ARC-avoiding and a pile shows up. Yes, I'm laughing. At least I only bought one book (although, actually, there's another on the way). The three books from Scholastic were totally unexpected but I'm pretty sure I signed up to read them via Shelf Awareness. I just didn't know if anything would show up, as is often the case with SA. To be honest, it's been very difficult keeping my hands off those three -- especially D-Day. I may just have to read early and pre-post my reviews (they're late August releases). The other three books are ARCs that my friend Paula got duplicates of, as I recall. I completely forgot they were coming, even after she reminded me.

The latter two books were both rereads. Once again, I missed book group due to rain, but I enjoyed rereading Born a Crime immensely. It's such a terrific book and a great learning experience about Apartheid, the concept of "divide and conquer" and how it can be used to turn people against each other so that those in a minority can grab political power, and the amazing power of humor in difficulty. I could not be more impressed with Trevor Noah and his mother.

I just finished The Space Between Us, last night, and went straight into the reading of its follow-up, The Secrets Between Us. I thought I'd need a break between the two but instead I wanted to keep reading to see what will happen to Bhima and Maya, an elderly woman and her granddaughter who live in a Bombay slum. The Space Between Us has the most beautiful ending. It's a harsh book but I can see why -- even after forgetting the details of Bhima's story completely -- I still had a little warm corner of my heart that remembered the feeling the book left me with.


So far, so good on The Secrets Between Us. It picked up right where The Space Between Us left off and then jumped forward by a year.

Nightbooks appears to be a middle grade story and it has a nice, creepy beginning. I only read one chapter before my eyes became heavy (after finishing The Space Between Us and reading about 40 pages of The Secrets Between Us) but I'm looking forward to reading more, tonight.

Last week was a great blogging week because I was able to get everything pre-posted and then just put up links at Facebook and Twitter, each day, and walk away. That works so much better for me than getting up in the morning to write each day's posts, but I don't always get around to pre-posting.

Huzzybuns was away on business, last week, so I just guessed at which show he was least likely to care about missing out on if I went ahead and watched it and I settled on Our Girl (it turns out I was correct -- he felt no attachment to the show and didn't mind that I watched without him). I finished the entire first season and thought they did an excellent job of wrapping up Molly's story. If the actress who played Molly had chosen to return, it would have worked fine. But, the fact that she was unable to continue the series meant an entirely new starring role. Georgie Lane is now our girl and it took a while to warm up to her. You don't get to know her backstory -- why she joined the army, that is -- the way you do with Molly Dawes. But, the first episode was a two-part episode in which she was kidnapped by the bad guys and that served to introduce her as the new, plucky, resourceful, and tough replacement that one would hope for. I'm looking forward to more, this week.

That's really the only thing I watched and I kind of binged on Our Girl, on a day when I had a migraine, it was raining, and I knew I was going to miss my book group so I was feeling gloomy. I'm not a big binge-watcher, but it's nice to do that, now and then, when you need to put your head in a different place to get over yourself.


©2018 Nancy Horner. All rights reserved. If you are reading this post at a site other than Bookfoolery or its RSS feed, you are reading a stolen feed. Email bookfoolery@gmail.com for written permission to reproduce text or photos.
Posted by Bookfool at 12:23 PM