Who Was George Washington Carver? by Jim Gigliotti and Who Was Genghis Khan? by Nico Medina

First an explanation of this tour: The WhoHQ Blog Tour is a review of the books in a children's biography series, now with a companion show called The Who Was? Show on Netflix. I'll describe the books, first, and then the episodes I viewed and how they portrayed the content of the books. 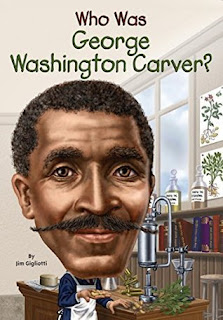 He had a burning desire to learn, a sharp mind, and a willingness to work hard to get the education he desired. A scientist, inventor, business owner, and educator, George Washington Carver was an amazing man who dedicated his inventions, his writings, and business ventures to improving the lives of people.

All this and more is in Who Was George Washington Carver? At 105 pages, the book is slim but Gigliotti packed a lot of information between its covers and with a stunning clarity. I was impressed by how much I learned from this little book. Gigliotti gives you a thorough overview of Carver's life and the illustrations add an extra dimension, with images of the places he lived and worked, maps, inventions, and people who were important to him. 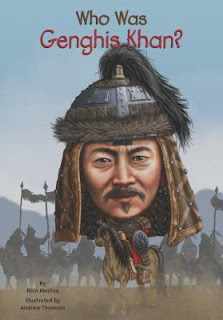 Who Was Genghis Khan? by Nico Medina had the same effect on me that Who Was George Washington Carver? had - mind boggled at how much I learned in such a short time. I think I'd just thought of him as some legendary conqueror who went around slaughtering people for the spoils, and that was that. Instead, I learned that by invading other Mongolian tribes on the Steppe, he not only united a people but created a decent society out of one that was formerly a bunch of tribes who invaded each other whenever they needed something.

He introduced wealth sharing and a delay in hunting so that animals had time to grow, allowed freedom of religion, created a written language and a postal service . . . all sorts of things that we might consider modern or progressive were introduced by Genghis Khan.Who Was Genghis Khan? is a single page longer than the bio of George Washington Carver, so they really cram a lot of information between their covers. I didn't know, for example, that Genghis Khan never allowed anyone to paint his portrait or represent him in any other way. So, we have no idea what he looked like; we can only guess based on how other Mongolians looked.

Both highly recommended - I received both of these books for review and I only wish they'd sent me the entire series. The Who Was? series is a great way to introduce children to a variety of important historical characters. 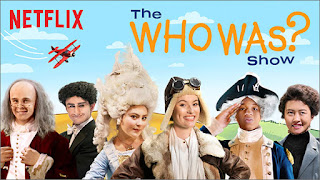 Netflix has a show that serves as a companion to the Who Was? book series called The Who Was? Show and I watched the episode that describes George Washington Carver and Genghis Khan. I admit, I was a little stunned to find it so goofy. I wasn't entirely sure I found it all that educational, either. So, I watched another episode (Pablo Picasso and the Wright Brothers). This time, my husband sat down and watched with me. It was a lot more palatable the second time. Young actors dress up as the characters. They dance, they sing, they tell jokes, and they act out scenes from the lives of the famous characters. Sometimes, they'll show a brief cartoon or have a cartoon character interact with the humans. Point being, I was looking at it all wrong, at first. I was watching from the perspective of an adult who had read the books and was expecting all that information to be crammed into an episode. But, it's geared to kids, of course, and once you know what to expect, it's great.

Watching an episode that was about characters whose biographies I had not read really gave me a good perspective of how much information they managed to impart. Husband also reminded me that our kids watched something similar when they were young: Beekman's World, a science show that was goofy but informative. I didn't remember the fact that it had a huge rat character; I do recall the kids loved it, though, and that's what counts.

Bottom line - I recommend the series, but I'd suggest watching an episode before you read the book, if you plan to do both. Either way, they're both informative. But, the books go into a great deal more detail, of course.


Fiona Friday was moved to Thursday, this week, due to today's book tour: Fiona Fursday

©2018 Nancy Horner. All rights reserved. If you are reading this post at a site other than Bookfoolery or its RSS feed, you are reading a stolen feed. Email bookfoolery@gmail.com for written permission to reproduce text or photos.
Posted by Bookfool at 7:05 AM