The Lost Family by Jenna Blum 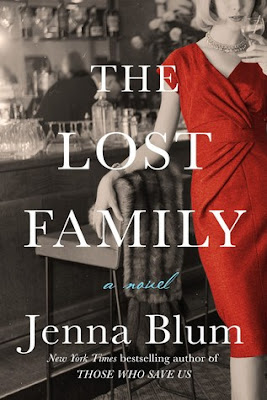 The Lost Family is the story of Peter Rashkin, a man who survived Auschwitz but lost his entire family, with the exception of a cousin and his wife who were already living in America. After the war, Peter came to live in New York and he's been there for some time at the beginning of the story. The book begins in the 1960s. Peter's restaurant, Masha's, is well-established and known as a desirable place to dine. His restaurant is his life and while he has dated, Peter keeps women at arms length until he meets June Bouquet, a model who looks a lot like Twiggy and who is young enough that she doesn't show the usual interest in his past life.

Jenna Blum artfully brings to the page a husband devastated by a grief he cannot name, a frustrated wife struggling to compete with a ghost she cannot banish, and a daughter sensitive to the pain of both her own family and another lost before she was born. Spanning three cinematic decades, The Lost Family is a charming, funny, and elegantly bittersweet study of the repercussions of loss and love.

I have mixed feelings about The Lost Family. Jenna Blum's writing is excellent -- so much so that even during the times I really wasn't enjoying the story, I found it compelling enough to keep going. That's pretty unusual. The theme of the book is clearly that the pain of such an agonizing loss can be impossible for some people to conquer and its effects reverberate through one's relationships. I won't give away what form the pain takes for June and for their daughter, Elsbeth, but I'm going to hint at how June's frustrations manifest by telling you my least favorite thing about the book and that is the sheer quantity of sex scenes. As anyone who regularly reads my blog will know, I'm okay with graphic sex if it forwards the plot. I didn't feel like the detail was necessary, in this case, so The Lost Family is not a favorite because of the amount of time spent delving into June's sex life, in my humble opinion.

So, it's odd that I never once even thought about abandoning the book, even when the storyline didn't interest me. I think it was all down to two things: I understood what the author was trying to say, even when I didn't enjoy how the story unfolded, and Jenna Blum's writing simply flowed beautifully. I just never felt like there was a time I wasn't compelled to find out what was going to happen. Plus, I liked Peter. Distant as he was, I cared about him. June, not so much. I began to dislike her near the beginning of the second section, which takes place in the 1970s, and by the third section I loathed her.

Recommended but not a favorite - If you're interested in reading a story about the kind of lasting pain caused by tragedy (told across three decades) and you don't mind a lot of fairly graphic sex scenes, this may be the story for you. For me . . . not so much. I liked how The Lost Family ended and I really liked Jenna Blum's writing but I was disappointed, in general. Having fallen in love with her writing, though, I can't wait to read her other books. I've had Those Who Save Us sitting on one of my WWII shelves since a couple years after it came out and I have a copy of The Stormchasers, as well. My distaste for June's behavior and the description of how June shows her pain is what I disliked about The Lost Family. I liked the rest, so I gave it an above-average rating.

Note: I completely forgot to mention that I thought the time and places were incredibly well-described. Sometimes I express myself better in fewer words when I talk to friends or post on FB. Here's what I said when posting a link at Facebook:

Loved the writing, often disliked where the storyline went, but understood the purpose and *high five* to meaning. I neglected to mention the perfection of the settings, which made the reading feel a bit like time travel.

A stand-out passage: I marked p. 122 of The Lost Family (Advance Reader Copy) because there's a rant by Peter that I found particularly fascinating, about how Hitler lied and blamed the Jews for all of Germany's problems, economic woes in particular. Substitute "Trump" for Hitler and "immigrants" for Jews and it's kind of startling . . . it sounds way too close to what's happening right now.  It's no coincidence that Jenna Blum has been sounding the alarm about the parallels between Germany in the 1930s and what's happened since this new administration began in the U.S., for the past couple of years. She interviewed many Holocaust survivors, researched fascism, and studied WWII. She's worth listening to and I'm certain there was a purpose to that particular rant, as well as the theme of the story.