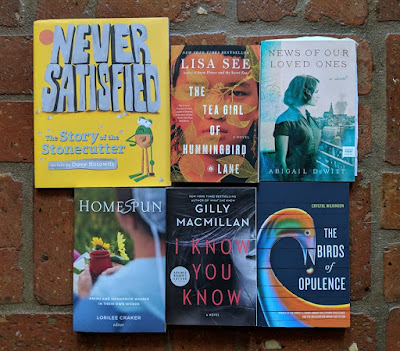 
I didn't photograph these in any particular order but 2 are for discussion, 1 for book tour, 3 for review. So, a nice hodge-podge of personal purchases and review/tour books. Once again, Izzy helped me with the book photography. 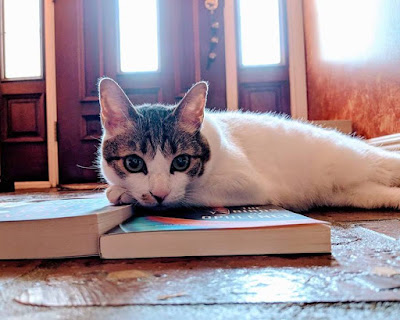 
Nightbooks is for middle readers: a nice, spooky read about a child who gets trapped in an enchanted apartment by a witch. It would make great fall reading for either a creepy/atmospheric reading challenge or a cold-weather readathon.

The Secrets Between Us is the follow-up to The Space Between Us and while there are plenty of challenging situations for the impoverished characters, Bhima's continuing story is slightly more upbeat and it has that "creating a family of your own through friendships" aspect that is among my absolute favorite types of storyline.


Unpunished Murder is about a massacre of black "freedman" in a Louisiana town by white supremacists. It took place in 1873 and the book is directed at younger readers but I'm learning a great deal. If white supremacy gets you riled up, you'll find yourself wanting to throw things while reading the book. It's very upsetting, not only to read about how blacks were murdered but how they were generally suppressed and hardly really "free" because a bunch of old white men ran the government. Worst part: so little has changed.

The War that Saved My Life is a Newbery Honor Book that I ordered after seeing a friend's post about the follow-up book and going back to read about its predecessor. It tells the story of a disabled British girl who becomes determined to learn to walk, in spite of her ruined ankle, and what happens when she and her brother are sent to the country to escape the Blitz. I'm enjoying it immensely, so far.


Yay, I had a terrific posting week! At the end of the week, I had only one book remaining on my list that has not been reviewed: Don Quixote. Of course, now I've added a couple more but I've been keeping caught up in a way I don't normally do and I'm happy about that.

I had a second day of binge-watching Our Girl and finished it up. Our Girl is pretty binge-worthy because of the exciting action scenes and serial storyline. While I felt like the introduction to the new starring soldier, Georgie, was somewhat lacking, by the time you've watched her two-part intro you have a good feel for the character and know that she's every bit as spunky as her predecessor. Captain James, Molly Dawes' commanding officer and love interest in the first season, is still the commander and occasionally mentions Molly. But, there's a new love triangle. Lance Corporal Georgie Lane was abandoned at the alter. When she goes on a humanitarian mission in Kenya and is kidnapped, Special Forces comes to the rescue. But, the team leader just happens to be the groom who backed out of marrying Georgie. Georgie is now engaged to a doctor back home in Manchester. Bit of tension, there.

Wow, that Manchester accent is challenging! I always turn on the subtitles but I still had to rewind, occasionally, because the words I was hearing didn't sound anything like I'd heard them before. "Fear" was the one word I kept rewinding and rewinding to hear again. It doesn't sound like fear at all, to me. I finally began to get a hang of the accent as the season was ending and there's no Season 3 available, yet, so I may actually watch it again for the fun of getting to know a new accent. 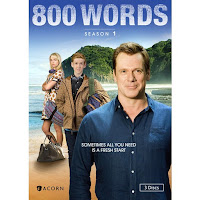 Husband was gone most of the week, so we didn't watch anything together till this weekend. We opted to continue 800 Words and enjoyed the second episode. We also watched an episode of Death in Paradise, which we've decided we may return to watching regularly, now that the second detective (whom neither of us liked) has moved on.

I never mention it, but Diners, Drive-Ins, and Dives is a favorite show that we dip into, whenever we can't make up our minds about what to watch. My eldest son says he can't tolerate the show, but we both enjoy it because we like seeing what's put into the various dishes and storing up ideas for places to go when we travel. Huzzybuns does more traveling than I do, of course, so he's tried several restaurants he's seen on DDD. I think I've only tried one and I wasn't thrilled with it but it was pizza that we brought back to the hotel room and it likely would have tasted better fresh out of the oven. We also watched a little of The Barefoot Contessa and picked out a couple recipes we want to try.

I almost forgot our last TV indulgence! I started watching The Quatermass Experiment without knowing any of its history and finished it up with Huz, after he got home from travel. He'd read up on it and was able to tell me that it was originally a 1950s serial that was redone as a live television film in 2005. It was the 2005 production with David Tennant that we watched. Very fun and creepy. I had no idea it was a live production until Huz blurted out that little bit of info while we were watching. He also told me they used the exact same script, which I didn't find surprising at all. You can definitely tell.

Other than TV, we cleaned all weekend because we're expecting guests in a little over a month and need to get serious about de-cluttering. I was a KonMari failure, so we're doing our own thing. So far, so good. I managed to get together with a teacher to give her a couple sacks full of children's books, last week and I did some trading when we were in Tulsa, but I'm going to have to work harder at weeding out old books that I'm no longer interested in reading.


©2018 Nancy Horner. All rights reserved. If you are reading this post at a site other than Bookfoolery or its RSS feed, you are reading a stolen feed. Email bookfoolery@gmail.com for written permission to reproduce text or photos.
Posted by Bookfool at 1:28 PM