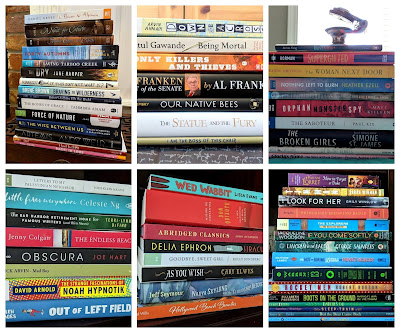 I'm usually pretty awful at doing the end-of-year round-ups, these days, so I decided to do a 6-month wrap-up, instead -- and, hopefully, I'll also do this at the end of the year. As of this point in time, I've written at least a line or two about every book except Don Quixote and Wed Wabbit, so you can click on the links to see either my reviews or a short description in a monthly reads-in-review post, depending upon whether or not I reviewed them.

My goal in the Goodreads Reading Challenge for 2018 is 100 books so every book is a percentage point and that means I finished 69% of the books I've challenged myself to read this year, by the end of June. Admittedly, I did set the goal line deliberately low. My average tends to fall around 125 books in a year with a peak of 202 in 2009. Roger Ebert actually tweeted a link to my complete "Books Read" list when I posted the 2009 list in 2010, so it was a peak in more ways than one.

As to the first half of 2018, I think it's been pretty terrific, in general. Because I devoted several months to Don Quixote, I've only read two classics in 2018: the other is Flowers for Algernon. Both were marvelous in entirely different ways. I was both depressed and impressed by Flowers for Algernon. I was alternately entertained, horrified, bogged down and delighted by Don Quixote.


Of all those books, the ones I seem to think about the most are Mad Boy by Nick Arvin, Tin Man by Sarah Winman, The Saboteur by Paul Nix, Being Mortal by Atul Gawande, and Al Franken, Giant of the Senate -- all for different reasons. Mad Boy was unique, made me smile and cringe, and I would say definitely is my favorite of 2018, so far. Tin Man had a character who was a little obsessed with Vincent Van Gogh's "Sunflowers" series and I keep seeing references to those paintings that take me back to the book. I learned about the Special Operations Executive (SOE) in The Saboteur and it was frequently mentioned in Foyle's War. Being Mortal keeps coming to mind because I've been thinking about the future and how we'll handle both retirement and end-of-life decisions, one day. And, I just loved Al Franken, Giant of the Senate.


A good first half of the year, I think. Onward!

©2018 Nancy Horner. All rights reserved. If you are reading this post at a site other than Bookfoolery or its RSS feed, you are reading a stolen feed. Email bookfoolery@gmail.com for written permission to reproduce text or photos.
Posted by Bookfool at 7:03 AM