Out of Left Field by Ellen Klages 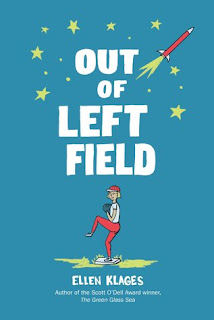 Out of Left Field is about a girl named Katy Gordon. Katy loves baseball and she's an excellent pitcher, the best in her neighborhood. The boys all know it and they're happy to have her pitch in their local sandlot ball games. But, when a man comes to one of the ball games and mistakes Katy for a boy, she doesn't correct him. He observes her skill and invites her to try out for Little League. Katy is excited until she gets to the tryouts and is turned down flat. It's 1957 and the rules are clear: Little League is for boys only, no girls allowed.

Katy's parents are divorced and her all-female family is accustomed to discrimination against females. Her mother and one of her sisters work in male-dominated fields. So, when her mother suggests researching women in baseball to try to sway the minds of those in charge of Little League, she's excited. And, she's stunned to find that women's baseball leagues and women playing baseball with men were a lot more common in the past. But, will her research be enough to get Katy into Little League?

There were several things I absolutely loved about Out of Left Field. One is that it becomes clear up front that Katy is not going to succeed and she pretty much understands that. But, she learns to take joy from the research itself and her mother, a scientist, is very helpful and supportive. I particularly liked this quote by her mother:

"Good research skills are a secret weapon that will come in handy down the road."

I also loved the fact that while Out of Left Field describes a discriminatory practice, it also shows that when you're really good at something, those around you will notice. You may run up against institutional discrimination but you'll also find people who appreciate your skill (the neighborhood boys, in this case). That's a decent lesson, since girls/women still experience the frustration of being treated differently because of their sex.

And, I loved the extra material at the end of the book. There's a nice section with mini-bios of women who were well-known baseball players. Some didn't get very far, some had careers that lasted as long as a couple decades. And then there were the all-women's baseball teams that were created to keep baseball leagues earning money during wartime, like the women in the movie A League of Their Own. The history of women in baseball was fascinating and describing it through the fictional eyes of young Katy made the learning fun.

Highly recommended - A fun story and also a very informative middle-grade novel about the surprising history of women in baseball and how the history was almost entirely erased, women's ability to join baseball teams quashed. While the book is mostly about Katy's choice to research, the author kept it interesting. I loved learning about women in baseball. Apart from watching A League of Their Own, I had never read or heard anything about women in baseball. Only one of the women described was familiar to me: Babe Didrikson Zaharias. And, that was because of yet another movie. I also thought the author did a marvelous job of describing the historical setting, a time when the Soviets were winning the early space race. I'd heard of the Sputnik satellites but hadn't heard of the Vanguard satellite failures, so I ended up watching a video of the failed first launch on YouTube. The 50s setting was nicely described; I really enjoyed that.

The book includes a glossary of terms used in the book and a list of additional reading materials.