Happy Monday! I hope you had a good weekend. 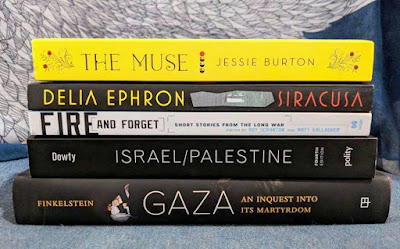 
All were purchased. The Muse and Siracusa were bought for F2F discussion but then our calendar showed up and The Muse wasn't on it, so I may have jumped the gun. I thought it was a definite. It sounds good, though, so I won't consider that a bad purchase if it doesn't end up being a discussion book. Fire and Forget has a story each by two authors I've enjoyed: Siobhan Fallon and David Abrams (and I love war stories), so that was a bit of an impulse purchase after David Abrams mentioned it on Facebook. And, I bought Israel/Palestine and Gaza to try to fill out my understanding of the history of the region. Gaza's subtitle indicates that it might be a bit biased but Israel/Palestine is written with a neutral tone and I just finished a book by someone writing from the Jewish perspective, so it should all balance out.

Not a big reading week but both books were excellent.


Quite a hodgepodge, there. I took a day to study up on the Israel/Palestine region and the conflict (the slash is to show that the area currently occupied by Israelis is also claimed by Palestinians, in order to remain neutral, in the title of the book I bought) to help me put Letters to my Palestinian Neighbor into perspective because I knew basically nothing. The reading is timely, since our embassy has just been moved to Jerusalem and I had no understanding at all of why that would cause conflict and/or why people I know tend to take a particular side. Israel/Palestine is written for people like myself, who know little to nothing and it's very educational. I'm learning a lot!

The Strange Fascinations of Noah Hypnotik is a YA tour book.  I was struggling with this one, finding it directionless. So, last night I started over from the beginning, rereading the first 60-something pages. That helped. It's finally starting to coelesce around its subject, now, at 100 pages. The tour is scheduled for Thursday and I'm relieved that rereading it helped me make sense of where it was headed. The narrator rambles a bit, so the first of the book felt like gathering helium-filled balloons that had floated to separate corners and now the author is tying their strings together.

And, I've decided I'm going to go ahead and take off next week from blogging and other books to finish up Don Quixote. I can't stand to have that book hanging over my head any longer and I'm eager to move on to my second chunkster-classic, Gone With the Wind. If I find enough time to pre-post reviews, though, I'll go ahead and get some posts written for next week. I'll update on Friday to let you know whether or not there will be any posts, next week.


I had a great blogging week! All of those books are children's (picture books to middle readers). I'm really loving the children's books, this year.

I finally finished reviewing my April reads, so I'm working on my monthly "Reads in Brief" post for April. It was quite a substantial stack. This month won't be so great quantity-wise but that's not a bad thing. I need to catch up with myself a bit.

After a bit of reflection, I've decided to make that week off from blogging and reading books other than Don Quixote an internet break because staying off the internet will help me finish faster. Again, I'll let you know if I get around to pre-posting. It won't hurt to at least get on to post links on Facebook and Twitter, even if I'm taking off otherwise from the Internet.

We tried a broccoli salad recipe from the B.T.C. Cookbook, this weekend, and it's so good I want to make it a regular staple. In case you're not familiar with the cookbook, it's recipes from someone who runs a restaurant and grocery store in Taylor, Mississippi. We've bought various casseroles and other pre-made items from B.T.C. Grocery for years, so we were really excited when they came out with a cookbook. So far, we've loved absolutely everything we've cooked from that book. It's Southern recipes, so it leans high-fat, but also high-flavor.

©2018 Nancy Horner. All rights reserved. If you are reading this post at a site other than Bookfoolery or its RSS feed, you are reading a stolen feed. Email bookfoolery@gmail.com for written permission to reproduce text or photos.
Posted by Bookfool at 12:43 PM