The Strange Fascinations of Noah Hypnotik by David Arnold 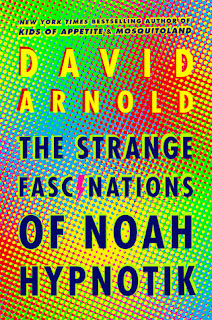 Mr. Tuttle instructed us to open our Steinbeck tomes, and our laughs were replaced with visions of dust and booze and haggard tires on the road West, where the busty, analogous milky white breasts of rural America patiently awaited our arrival.

~from p. 38 of ARC, The Strange Fascinations of Noah Hypnotik by David Arnold

The Strange Fascinations of Noah Hypnotik is the story of Noah Oakman, a high school student with two extremely close friends, siblings named Alan and Val. Toward the beginning of the book, Val pressures Noah into going to a party. Noah has been a little off since he faked a swimming injury and his parents have been nudging him to make a decision about the college scholarship he's been offered. He doesn't want to go to a party. He doesn't want to go anywhere. And, he really doesn't want to swim in college. But, he and the Rosa-Haas siblings are close so he reluctantly agrees to go to the party with them.

At the party, Noah does something he doesn't usually do: he drinks. Heavily. And, then he says something regrettable to Alan and goes to hang out with a guy named Circuit. What happens after he leaves Circuit's house is as psychedelic as the cover of the book. Suddenly, things around him have changed. His weird little dog has become normal, his mother has a scar he's never seen, and his best friends are no longer planning to attend colleges that are close to home. What's happened? Circuit's father was an inventor and Circuit is equally geeky. Did Circuit do something to Noah's brain? To find out, Noah zones in on the few things that haven't changed: his sister and his Strange Fascinations among them. By researching these things, maybe he can figure out what's happened to the world -- or to his mind.

The Strange Fascinations of Noah Hypnotik is told in first person, so you're in Noah's mind while he's trying to figure these things out and it's sometimes merely disorienting, sometimes confusing. As I mentioned earlier, the first part of the book befuddled me so much that I stopped at page 66 and started all over again. After that, I began to feel like I understood what was happening -- something had happened to Noah and he was on a quest to solve the mystery of why things had changed -- but I still often felt unbalanced during the reading and occasionally wondered if I would have set the book aside entirely, if not for the fact that I was obligated to write a tour post.

Having said that, I eventually began to embrace the hallucinogenic aspect of the book, even if I didn't always thoroughly understand what was happening. Throughout the book, it continued to feel a bit like the author was herding cats, or trying to and failing. But, the last 50 pages or so is where the cats all end up piled on top of each other on the same warm blanket; meaning, the ending is satisfying and pulls everything together.

Recommended - While this book felt, at times, like a rambling mess, it all comes together in the end and it's worth sticking it out through the insanity. At least, that's how I felt upon closing the book. I would suggest saving this book for when you're in the mood for something truly weird but clever. The writing is, in fact, almost too wise to believe it could be the thoughts of a 16-year-old, at times, although perhaps I'm too far removed from 16 to have any idea how a teenager thinks. What I liked best about the book was the relationship between the three friends. The author did a great job of emphasizing how rare and beautiful that kind of deep friendship is and why it should be treasured.

Side note: One of Noah's obsessions (or "Strange Fascinations", as he refers to them) is a book by a fictional author named Mila Henry. Her oddities are so believable that I ended up looking online to see if there really was a famous author named Mila Henry that I'd never heard about. Well, no. She's fictional, all right. Oddly, there is a Mila Henry who pops up when you do a general search -- a New York based pianist, coach, and music director. Music plays a heavy role in the book, as well (David Bowie's music) so I thought that was an interesting coincidence.

Email ThisBlogThis!Share to TwitterShare to FacebookShare to Pinterest
Labels: David Arnold, recommended, Viking, would make a great Weirdathon choice, YA