The Endless Beach by Jenny Colgan 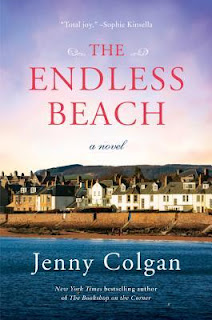 A note up front: The Endless Beach is apparently a follow-up book to The Café by the Sea (I couldn't tell if there was only one previous book or more from the author's intro, but I suspect that it's the second book that takes place with the same characters). While the author did a good job of catching up readers who missed the first book, I think it would have been more enjoyable to read The Café by the Sea, first.

Flora is the proprietor of the small Café by the Sea, a little shop that caters to the needs of islanders on the Scottish island of Mure. Flora has been in a relationship with her former boss, Joel, since he followed her to Mure and she gave up her London job. Now, Joel is working for a fabulously wealthy man who has fallen in love with Flora's brother and is planning to open a hotel on the island. The job is taking Joel away to New York City for long stretches and Flora is beginning to have doubts. Is he really the man for her?

Meanwhile, the café is beginning to struggle. After Flora caters a wedding, she has difficulty getting the bride to pay up. And, her low prices are starting to hit the bottom line hard. At the same time, whales have been seen off the coast of Mure. They're considered a bad omen and Flora is feeling uneasy.

What will become of Flora's relationship with Joel? What is his fabulously wealthy boss's crushing secret? And, will Flora be able to save the café?

There are other things going on in The Endless Beach. It has a bit of a soap opera feel (which I love), like you're a part of this little community and become invested in everyone's life. The local doctor, for example, left a wife and two children behind in Syria and a teacher and friend of Flora's has fallen for him. But, when he hears news about his family from a social worker, his world is turned upside-down and the teacher is left torn.

Highly recommended - I suggest reading The Café by the Sea, first, because I had a little difficulty understanding where the characters were coming from, in spite of the fact that the author catches you up nicely on events that occurred in the previous book. If you can't get your mitts on the first book you'll be fine; reading the first will just acquaint you with the characters and the background of the second book better. I love that feeling that you're swept into the happenings of the island and get a feel for the community, not just the main characters. And, I love Jenny Colgan's writing, in general. It leans "cheerful", even when the characters are facing challenges.