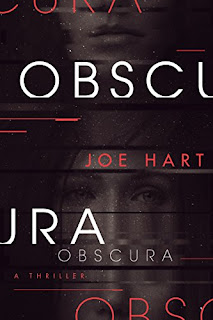 Obscura by Joe Hart takes place in the near future, when a new disease called Losian's is attacking the brains of its victims, leaving tangles of neurons that cause trance-like states, occasional violence, and other issues. It's a bit like Alzheimer's on speed and it has already killed Dr. Gillian Ryan's husband. Now, her daughter has it, as well.

When Gillian is offered unlimited funding for her research into Losian's if she'll travel to a space station, where astronauts are suffering similar symptoms, she's hesitant. Her funding is about to be cut, not only destroying her work but the chance to save her daughter's life. Gillian doesn't want to leave her daughter, whose episodes of what she calls "the fuzzies" are increasing in frequency, but the funding she's been offered may be her daughter's only hope. Gillian's sure she's on the verge of a breakthrough.

She agrees, only to find that she's been misled. But, now that she's on the ship, Gillian has no way to return to Earth and no choice but to go ahead with the job. When people begin dying violently, Gillian is suspected of murder. Even she is not 100% certain if she's innocent. But, there's no time for that. Can Gillian figure out the cause of the memory loss and violence before it's too late?

Recommended - While I didn't absolutely love Obscura, I liked it more the farther I got into it and the ending was edge-of-your-seat, violent, action-packed, and exciting. I sort of predicted what would happen in the end and was correct to a point, but I did find a lot of the book surprising and I liked the concepts and loved the ending. I'm glad I read Obscura and I know exactly which friend I want to pass it on to. Recommended particularly to fans of sci-fi and action/thrillers.


©2018 Nancy Horner. All rights reserved. If you are reading this post at a site other than Bookfoolery or its RSS feed, you are reading a stolen feed. Email bookfoolery@gmail.com for written permission to reproduce text or photos.
Posted by Bookfool at 2:37 PM