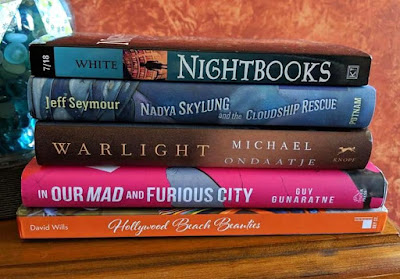 
Fun stuff. Hollywood Beach Beauties is a book of vintage photographs that actually goes a bit beyond the beach and includes some movie posters. It covers several decades of photography. Nightbooks and Nadya Skylung both appear to be middle readers. Warlight is a book I pre-ordered and had forgotten about till I was notified that it was on its way, but I'm not surprised I pre-ordered it (sometimes, I totally forget pre-orders and then wonder what possessed me to buy them); I love Ondaatje. And, In Our Mad and Furious City is a book that a bookstore proprietor in London mentioned glowingly on Twitter. I looked it up and liked the sound of it.


A fantastic couple of weeks of reading. Mad Boy is, I think, the only book I've ever read that's been set during the War of 1812 and it's a unique, surprising, exceptional read. The Endless Beach is the 4th in a series and the author nicely caught me up as I've missed the rest (but I think I have one of the earlier titles, which a friend sent me). It's a bit of a soap opera and I happen to like that. I've already reviewed Obscura because it was released last week, so check the recent posts column for a link to that. And, I'm looking forward to this week's group discussion of Little Fires Everywhere.


I am so sick of typing "Don Quixote" but I've been planning my month's reads in advance and it's been hard to fit in that damn book, most weeks, plus Book 2 is just not as compelling as Book 1. Swear I'm going to take off a week to finish it, soon. In my little Facebook group, nobody has said a word for over a month and I haven't bothered to ask if anyone's reading, although one friend admitted he's likely not going to finish. So, I may be on my own, which is fine. I just need to spend a week reading 100 pages a day till I'm done. Or 75 -- whatever works.

Out of Left Field is great, so far. It's about a girl who wants to play on a Little League baseball team. It's 1957 and she's a terrific pitcher but the Little League rules are very specific: boys only. Her mother and one of her sisters work in fields dominated by men, so butting heads with the patriarchy is not new to the family. What will happen?

We got to see snow in Colorado when we went for that wedding, last weekend! It was nice to experience a bit of brisk air before returning home. We're now in the 90s, so I don't think we'll be getting any cool air for . . . oh, maybe 6 months? It was a long spring but a wet one, so we didn't get to enjoy it as much as we would have liked. On to summer. 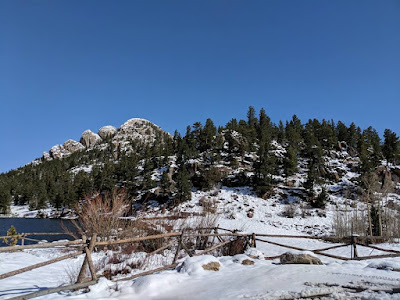 ©2018 Nancy Horner. All rights reserved. If you are reading this post at a site other than Bookfoolery or its RSS feed, you are reading a stolen feed. Email bookfoolery@gmail.com for written permission to reproduce text or photos.
Posted by Bookfool at 2:21 PM