Boots on the Ground by Elizabeth Partridge 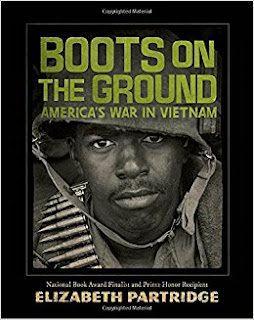 Boots on the Ground by Elizabeth Partridge is a book of personal stories about people who served during the Vietnam War interspersed with narrative about events that were occurring during the conflict, particularly what was happening within the government: how the serving presidents reacted to various developments, as well as how the war started, grew, and ended with the fall of Saigon.

Boots on the Ground ends with the dedication of The Wall, the Vietnam Memorial in Washington, D.C., and I found that quite interesting. I'm old enough to remember the competition for the design of The Wall and the controversy over the chosen design. In fact, I recall being disappointed in it and I'm aware of how my opinion has been altered over the years by the many deeply emotional photos I've seen of people finding the names of their loved ones and friends on The Wall. The description of the creator's design and what she meant to show, coupled with the reactions of those who tell their stories (including their experiences viewing the wall at the dedication) show just how important that memorial was, and is, to veterans and their loved ones and how the dark granite worked in exactly the way the young designer envisioned. It was quite moving.

While the publicity material says Boots on the Ground is for 7th grade and up, I learned quite a bit. Most of what I've read about the Vietnam War (or, in the case of novels, set during the war) has had some context but not a full overview of the war. It's still not a comprehensive history. When she talks about 1968, for example, one of the assassinations that took place isn't mentioned. But, the way the author interrupts each individual's story with a chapter about what was happening in America and why the war continued to drag on offers readers an exceptional sense of time and place. It's not meant to be a full account of the war; it's meant to be a set of personal stories told within their context and in that, the book succeeds.

The only thing I disliked about Boots on the Ground was the fact that each of the individual stories (from personal interviews) ended abruptly. At the end of the book was a description of what those individuals did after returning from the war, but the author could have put those single paragraphs at the end of the chapters instead of separating them and it would have made more sense, to me. At any rate, you have to flip to the back of the book to get a sense of completion. But, Partridge brings all their stories together at the memorial dedication, so once you get to the end you understand why she left each story hanging -- they weren't finished.

One of the personal stories was that of the man who came up with the idea for creating a memorial during a drunken night of depression. That man, Jan Scruggs, knew he needed some sense that the people he saw die were acknowledged and that other veterans of Vietnam must feel that way, as well, so when he came up with the idea he ran with it. And, the gist of the ending is that it worked, it was needed, and it helped people heal.

Highly recommended - Definitely a terrific read and incredibly moving, packed with photographs and with a lengthy bibliography for those who want to explore the topic further. I only took a half point off at Goodreads for the fact that Boots on the Ground felt so jumpy. I didn't like having to flip to a section at the back of the book to find out what became of each individual, but the author did tie everything up. Among the personal stories was one of a Vietnamese family's escape from Da Nang when the North Vietnamese invasion was taking place. It was harrowing and would make an excellent movie, in my humble opinion. Others told about a nurse who absolutely didn't want to end up in Vietnam but was misled by her recruiter into believing she wouldn't be sent there and an Asian American who had to stay on guard at all times for fear he'd be mistaken for the enemy. A very emotional read that gives readers, young and old, a good sense of what it was like to serve in Vietnam (or escape from the country) within the context of the time period.


©2018 Nancy Horner. All rights reserved. If you are reading this post at a site other than Bookfoolery or its RSS feed, you are reading a stolen feed. Email bookfoolery@gmail.com for written permission to reproduce text or photos.
Posted by Bookfool at 5:23 PM