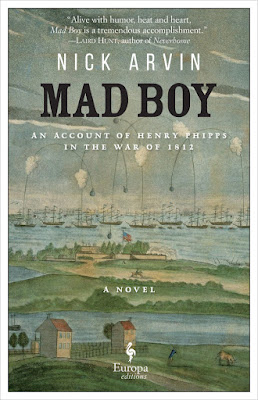 Mad Boy: An Account of Henry Phipps in the War of 1812 is the story of a boy who decides he must fulfill his mother's wish to bury her by the sea. Clocking in at a mere 236 pages, it is quite a tale of adventure. At the beginning of Mad Boy, Henry's mother is still alive. His father is in debtor's prison and Henry has just been told his older brother has been shot for going AWOL. The family has been in decline for several generations and has switched places with a former tenant, going from landlord to tenant, big house to dilapidated cabin. Henry's older brother has been in a relationship with the landlord's daughter but went off to war to earn soldier's pay when his father's drinking and gambling pushed them too far into debt.

So, everything is already falling apart when Henry's mother is tragically killed, leaving Henry to deal with figuring out how to get her body to Baltimore to be buried near her family and the sea, her first love. Meanwhile, there are Redcoats roaming the area, pillaging and causing all manner of trouble. And, Henry's path to the sea is not direct, to say the least.

I'm not going to say any more because it's so much fun to read the unfolding story, although I think it's of particular interest that Henry's mother is apparently bipolar. He describes her as talking non-stop and working herself to the bone when she's well, refusing to leave her bed and facing the wall when she's not. Henry continues to hear her chattering after she's killed, one of the most entertaining and endearing aspects of the book.

Highly recommended - I absolutely loved this book. It's both beautifully written and somewhat nuts, a young boy trying to haul his mother's body to the sea while war is going on around him and his mother's ghost occasionally tells him what to do. Toward the beginning of the book there are some graphic scenes that are a bit stomach-turning, but then the story becomes less gruesome and more adventurous. Henry is an interesting character and the family dynamics, the surprising things that happen (note: Henry is a very smart and restless boy), the battles around him, and the denouement are all utterly captivating. Chances are good that I'm going to spring for Nick Arvin's older book, Articles of War, very soon. I love his writing.

Mad Boy is a June release. I love this book and look at that cover! Isn't it marvelous? The copy I read was an ARC received from Europa Editions. I don't think I've ever read a book set during the War of 1812, before. I really enjoyed the setting and you know I'm going to feel compelled to read more about the War of 1812. That's how it always works, right?