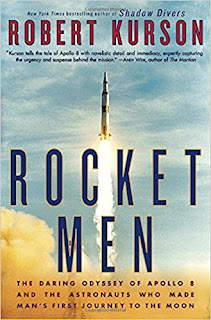 Rocket Men: The Daring Odyssey of Apollo 8 and the Astronauts Who Made Man's First Journey to the Moon by Robert Kurson is the true story of the first mission in which Americans orbited the moon, Apollo 8. I knew very little about Apollo 8, although I'm old enough to remember the first moon walk and (as is made clear in the book) it obviously had to have been a success or man would not have made it to the moon before the end of the 1960s.

What I didn't realize was that Apollo 8 didn't appear likely to happen as planned, after several failures large and small set the program's timescale behind President Kennedy's goal for getting man on the moon by the end of the decade. Kurson evaluates the mission itself, how it was sped up to meet the dual goals of beating the Soviet Union to the moon and reaching the moon in time to keep on track with Kennedy's goal, the lives of the astronauts who flew Apollo 8 and their wives, and what happened to those families after Apollo 8 ended.

Rocket Men was very good, really quite gripping, which surprised me since I already knew Apollo 8 was successful. In spite of the fact that Kurson made it clear it had to have been a success, the author still managed to give the story an edge-of-your-seat sensation. I'm not even sure how he did that. The pages absolutely flew.

Kurson also talked a great deal about the astronauts and their wives because they are all still alive and happily married, which is unusual. He was partly drawn to Apollo 8 when he discovered that it was one of the few successful missions in which all of the astronauts were fully supported and remained married to their wives (to this day -- as of the ARCs printing, all were still alive). That's notable because astronauts had such time-intensive jobs that broken marriages were common. Humorously, all the way through the book, before he mentioned the marriages as a particular oddity, I kept telling my husband I thought his job was bad enough with all the travel and I'm pretty sure I could absolutely not have coped with being an astronaut's wife, having to deal with having reporters camped out on your lawn and photographing you in your own home (each had a contract with LIFE magazine, which often meant a reporter and photographer sitting right there with you in your house during important moments - ugh).

So it was interesting that the author had a reason for choosing the depth of description about the individuals -- how the couples met and married, how the women felt about their husbands' travel and that particular mission, what the women had to put up with as wives and how they banded together or, at least once, insulted each other by refusing to do so, the early years of each astronaut's life and how his childhood influenced the ultimate decision to become an astronaut, what their lives were like after Apollo 8.

Highly recommended - Rocket Men is one of those rare nonfiction books in which the pages flew, my heart pounded, and I sometimes found myself actually leaning forward in anticipation. Amazing that the author managed to make something that happened nearly 50 years ago so exciting. And, certainly a book that gave me an even greater appreciation of the engineering field. Such precision in the calculations of when various events would happen still boggles the mind. I haven't read a great deal about NASA or the Apollo missions but I'm intrigued and want to read more, now.