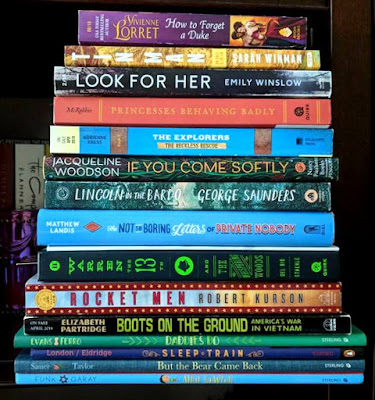 38. Princesses Behaving Badly by Linda Rodriguez McRobbie - Mini bios of various real-life princesses who plotted, schemed, stole power, made questionable choices, partied, were known for their sexual exploits, were crazy or acted like it, or who fought their own battles. An interesting book that led to a bit of further exploration on my part. I had favorites amongst the princesses.

39. The Not-So-Boring Letters of Private Nobody by Matthew Landis - When a Civil War buff and reenactor in middle school is given a disappointing assignment and an unexpected partner, he's bemused. But, then he makes some interesting discoveries; boring soldiers can have interesting stories and scruffy girls can turn out to be smart and appealing, after all. So. Much. Fun. Loved this book.

40. Look for Her by Emily Winslow - A long-missing student, a stained skirt, and two women who both are obsessed with the missing girl lead two investigators on a surprising path. The fourth book in a series, very good but not a personal favorite. I hadn't read the first three but the author does a fantastic job of catching you up without giving anything away.

41. Rocket Men by Robert Kurson - The true story of Apollo 8, the first mission to circle the moon in preparation for the moon landing and how it was rushed into completion in order to beat the Soviets in the space race. The author chose to highlight the personal stories of the astronauts and their wives as all three astronauts are still married (and alive) -- unusual for such an all-consuming and high-pressure job.

42. If You Come Softly by Jacqueline Woodson - A retelling of Romeo and Juliet for the YA crowd, in which a young couple literally bump into each other and meet eyes over the fallen books. Instant attraction becomes love that leads to tragedy. But, there's a softer, kinder ending with hope.

43. Sleep Train by Jonathan London and Lauren Eldridge - Inside a train traveling across the countryside, a little boy in the sleeping car reads the book he's in, counting the cars on the train instead of sheep and slowly falling to sleep. A gorgeous book.

44. But the Bear Came Back by Tammi Sauer and Dan Taylor - A very persistent bear keeps showing up at a little boy's house and he tells the bear to go away, repeatedly and without success. Till, one day, the boy shouts and the bear leaves. Then, the boy realizes just how much he misses the bear, who has become his friend. Charming.

45. Albie Newton by Josh Funk and Ester Garay - A boy genius moves to a new school in the middle of the year and decides to build something for his classmates, unaware that his single-minded focus is causing chaos in the classroom. Cute story and I love what Albie builds.

46. How to Forget a Duke by Vivienne Lorret - One of three sisters running a marriage agency goes to snoop on a duke in order to find out what he's hiding and find him a perfect matchmate. But, when she's injured and loses her memory, the duke must shelter her at his ancestral home while she recovers. Slow burn romance. I loved this book and a friend I loaned it to was also impressed.

47. Lincoln in the Bardo by George Saunders - A variety of voices tell the story of Willie Lincoln's death in the White House and how his father's love holds poor Willie's soul back instead of allowing him to move on. A little scattered for my taste but I loved the ending and Saunders' writing just blows me away.

48. Isosceles' Day by Kevin Meehan - Isosceles is a black labrador and the book is supposed to show a day in his life but I found it rather baffling and poorly written so I opted not to review it. If you can tolerate overly-rhyming text, the illustrations are beautiful.

49. Tin Man by Sarah Winman - After a tragic loss, a widower is working the night shift to avoid tossing and turning through the night. Then, a young co-worker cuts straight to the heart of his pain and helps him begin to heal. An immensely moving and tender story.

50. Warren the 13th and The Whispering Woods by Tania del Rio and Will Staehle - When disaster strikes Warren the 13th's hotel, he must venture out to find what he needs to get the hotel up and running. But, there are many dangers in the forest and a mimic takes over his hotel. A wonderful second entry in this delightful series. I love Warren.

51. The Reckless Rescue (The Explorers #2) by Adrienne Kress - A map memorized by a boy with a photographic memory leads to the boy being kidnapped. His best friend promises to rescue him. Action and adventure ensue as the two characters attempt to elude the dangerous men in search of the same map pieces as the children. Another fun entry but not as memorable as the first in the series. Love the humor in this series.

52. Daddies Do by Lezlie Evans and Elisa Ferro - A colorful book about the things daddies do with their children, with illustrations showing animal daddies and their furkids. Love the brightly-colored illustrations and the sweetness of daddies playing with, reading to their children, etc.

53. Boots on the Ground by Elizabeth Partridge - Biographies of people who served in Vietnam (and one who escaped during the fall of Saigon) interspersed with chapters about what was happening in politics and the American peace movement at the time. Concludes with the dedication of the Vietnam Memorial and how it helped those who served. The ending is particularly moving.

Wow, what a month! I liked or loved almost everything I read. Favorites were The Not-So-Boring Letters of Private Nobody, Rocket Men, How to Forget a Duke, If You Come Softly, Tin Man, Warren the 13th and the Whispering Woods, and Boots on the Ground.

Boots on the Ground was particularly meaningful and, almost coincidentally, 700 bikers (motorcyclists) traveled through our area, this weekend, on the Trail of Honor -- the annual trek to the Vietnam Memorial. I saw the helicopters flying above them and wondered what was happening. The sheer size of that group just goes to show how important the memorial was and is to the healing of those who served in Vietnam. I loved the way author Elizabeth Partridge described the memorial's creation and its importance in Boots on the Ground.

I liked everything else, with the single exception that I left unreviewed. It was a great month. Lots of children's books, a mystery, a romance, a nonfiction about a space mission, another about princesses, and a third about people who experienced the Vietnam War, a retelling of Romeo and Juliet for the YA crowd, and a couple literary titles. It was definitely an interesting month and a good one!