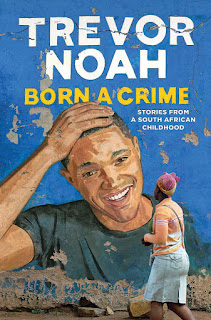 First things first. I've already read Born a Crime and reviewed it, once. So, here's my 2016 review of Born a Crime. This time, I read the book for group discussion and then it rained on the night of the meeting. I won't drive the 30 miles to my book group when it rains because the traffic is a little too dangerous driving through our God-kicked-over-the-bucket downpours, but I did get to talk to our group's host to see what people thought.

The general consensus was that everyone loved the book and thought it was a nice, light read for summer. I didn't get to hear any specifics, otherwise, but my friend Jeanine gave me permission to quote her thoughts from an email:

"This was one of the most entertaining books I have read in a long time. I thought it gave an interesting take on what it's like being on the inside of Apartheid while still managing to keep things moving and sparing us the most agonizing details. That's good for a summer read. At the same time, it's a good lesson about the resiliency of the human spirit in difficult circumstances."

I had some thoughts that were a bit different, this time around, and I'll just mention one thing that meant a bit more to me. The first time I read Born a Crime, I had not yet been to South Africa. So it was interesting, the second time, reading about Trevor Noah's time in the townships and actually having a frame of reference. We would call townships the poor side of town or maybe something like the "projects". He does a great job of describing what they look like. You see a lot of tin shacks and small houses built from blocks, stores set up inside shipping containers, and sometimes just a random wall or set of walls. I wondered about the walls. He said people will at first build a shack and then they'll slowly build on by adding a wall at a time and then eventually putting on a roof. But, they're people who have very little money so it takes time to build and that's why you'll see these really random looking walls beside the shacks.

I flipped through my pictures from Langa, a township in the Cape Town area and found a shot of some smaller tin homes next to houses: 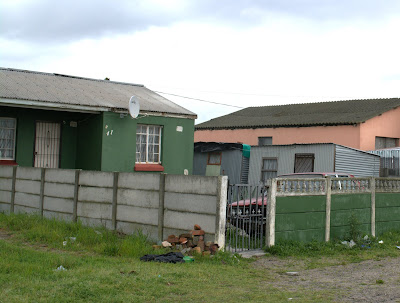 Langa doesn't look slummy; it's a poor area but really a fairly tidy, functioning community. The thing that interested me the most was the fact that it's pretty much an island unto itself, according to the man who took us on a tour through the township. Some people leave to work jobs in the city but you can do all of your shopping, get a haircut, order phone service, and go to school, etc., within the township. It's a necessity for the township to function that way because not everyone has access or the money to afford transportation to the big city, which in this case was Cape Town. That reminds me of one of my favorite quotes from Born a Crime:

Highly recommended - One of my top 5 memoirs of all time. I need to find a copy of this book on audio because I've heard it's even better hearing it read by Noah. It would definitely be helpful to hear some of the African words pronounced. A wonderful true story of life as an outsider in his own country, life during Apartheid and after, life as a poor person who learned that humor makes anything bearable. I just can't say enough positive things about this book.