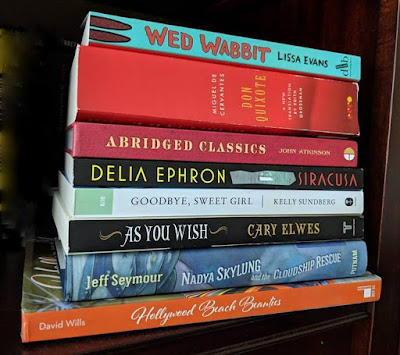 June reads (with links to reviews, where applicable):

62. Don Quixote by Miguel de Cervantes - The story of a mad but genteel Spaniard who believes himself to be a knight errant and goes off in search of adventure with his faithful squire, Sancho Panza. Probably the longest classic I've ever read and I'm happy to have finally succeeded at completing the book after 4 attempts. A delightful read but sometimes a bit of a slog because of its wordiness -- particular parts didn't appeal to me, although I loved it overall.

63. Hollywood Beach Beauties by David Wills - A coffee-table style book of bathing beauties (particularly Hollywood stars) from the 1930s to the 1970s, with emphasis on changing fashion. While I wasn't thrilled with the text, I learned a good bit about how bathing suit fashion changed over the decades. I also was fascinated by the changing image of beauty. Early bathing suit models -- starlets from Hollywood -- were often quite short and would be considered fat by today's modeling standards.

64. Goodbye, Sweet Girl by Kelly Sundberg - The memoir of a domestic violence victim who eventually escaped her dangerous marriage. Excellent writing and I thought her story did a great job of showing how violence escalates.

65. Nadya Skylung and the Cloudship Rescue by Jeff Seymour - A middle grade fantasy/adventure story in which it's safer to sail the clouds than to cross the sea or land on the world below. Nadya is a Skylung, a gilled humanoid who tends the plants that fill the cloudship's balloon. When pirates attack and take the adults into captivity, the children who work the cloudship must figure out how to release the craft from a tow line and rescue the adults. Very fun and appears to be the first in a series.

66. As You Wish by Cary Elwes and Joe Layden - A memoir of Cary Elwes' experience behind the scenes in the filming of The Princess Bride, in which he played Westley/The Dread Pirate Roberts. I loved learning not only about the actor's experience but how the script was shelved for many years, how the casting was done and why it finally became a film, and other little tidbits contributed by the director and other actors. A fun read.

67. Siracusa by Delia Ephron - The story of two couples on vacation in Italy, told from four alternating viewpoints. Nobody is particularly nice and something awful happens -- that's about the gist of the storyline. I read this one for F2F discussion but missed due to stormy weather. Although I didn't find the story all that compelling, I enjoyed looking up the sites they visited and opted to finish the book (which I hadn't yet completed by discussion day) after missing the meeting, so I didn't dislike it enough to abandon it.

68. Abridged Classics by John Atkinson - Another coffee-table style book (although small) of literary cartoons to tickle your funny bone in few words. The more accurate they are to the plot, the funnier.

69. Wed Wabbit by Lissa Evans - A middle reader about two sisters, one of whom can't or won't pronounce the letter "r", hence "Wed Wabbit," little Minnie's name for the stuffed maroon rabbit she carries everywhere. When tragedy strikes and big sister Fidge and her cousin Graham are transported into the world of Minnie's favorite book, where Wed Wabbit is the evil bad guy who has taken over the castle and everyone speaks in rhyme, she must figure out how to fight off the bad guys and return to her own world. Yet another brilliant, funny book by Lissa Evans.

I had a single DNF in June: The High Season by Judy Blundell. I put it in the "try again later" file because it wasn't awful; it just wasn't the right book for the moment. Having said that, it has an element of "rich people in the Hamptons in summer" and I've discovered that I'm not really into that particular type of story. Plus, I'd rather read about cold places when it's hot out, not beachy stories. Give me Sweden during a blizzard. Reading about heat while in the midst of it is not an escape for this girl.

The month started off badly. I was falling into a summer slump and I needed to wrap up a chunkster. The week I devoted to finishing up Don Quixote was worth it, but I read fewer books because of both that and the slump. However, I turned to As You Wish when nothing else was grabbing me and Westley/Cary Elwes saved the day. I was charmed and saved from Slumpville, simultaneously. Those two books were among my three favorites; the other was Wed Wabbit. I just adore Lissa Evans' writing.

Nadya Skylung was also loads of fun. And, I liked everything else I read, although the rest were not stand-outs. If I had to pick a least favorite, it would be Siracusa. And, yet, I was interested enough to finish it, so I'm convinced that at least part of the problem with that particular read was timing.

How was your reading month?

©2018 Nancy Horner. All rights reserved. If you are reading this post at a site other than Bookfoolery or its RSS feed, you are reading a stolen feed. Email bookfoolery@gmail.com for written permission to reproduce text or photos.
Posted by Bookfool at 1:51 PM