A Beginning at the End by Mike Chen 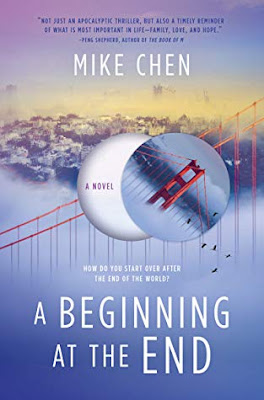 A Beginning at the End by Mike Chen is a post-apocalyptic tale that takes place 6 years after a pandemic. In an opening prologue that gives you a glimpse of the panic as the pandemic breaks out, a British pop star called Mojo is in concert (in New York, I think) when everyone receives a phone warning that the disease has spread out of control and the concert ends abruptly.

In the current time, 6 years post-disaster, the world is very different. 70% of the world's population died during the epidemic and the survivors are just trying to get some semblance of a normal life, but everything has changed. There are people who abide by the rules and try to get housing in the cities and those who've gone off-grid. There are also plenty of outlaws and a lot of mental health issues caused by a post-traumatic stress related to the pandemic. The government is trying to get a grip on all this by following any further potential outbreaks of the disease closely. Housing is also strictly controlled and families are watched carefully for signs that parents are unable to take care of their children due to the post-apocalyptic syndrome that burdens so many.

Mojo is now Moira, a young woman working an everyday job. She's engaged and has hired Krista to do her wedding planning. Krista does anything she can to earn money and she's in desperate need of a cash infusion to prevent losing her current home. She's a character who doesn't like to think of her messy past and youthful trauma, but it affects her in many ways. It's hard to know whether to admire Krista or scrunch your nose at her in distaste.

Moira works with Rob, a widower with a daughter named Sunny who keeps to himself. Sunny has been acting out in school and the agency that watches out for family stress is threatening to take her away from Rob. He's aware that he has contributed to the problem but he's a good father. Rob needs people to testify on his behalf that he's a good and caring parent but he's been such a loner since the pandemic that he doesn't have any friends to help out.

I can't remember how Rob encounters Krista but he enlists her help (for pay). Meanwhile, Rob becomes friends with Moira. As the three lives intersect, fear is rising. There have been several rumored breakouts of the illness that caused the pandemic.

Will Rob be able to keep his daughter from being taken away and put in a place where he doesn't believe his child will be cared for properly? When Moira's father begins a very public search for her as Mojo and her face is splashed everywhere, will someone turn her in? Is Krista really willing to do anything for money or does she have a heart in there, somewhere? Will there be another pandemic? If so, what will happen to everyone? Will the population survive?

Recommended - I was so crazy about Mike Chen's first book, Here and Now and Then, that I pre-ordered A Beginning at the End. While I ended up giving it a 4/5 because the second half of A Beginning at the End becomes exciting, tense, and even a little heart-pounding, I struggled with the beginning of the book because the challenges were kind of . . . meh. And, I kept getting Krista and Moira confused. After I resolved my issue with keeping the two female characters distinct in my mind and once the pace picked up, I loved the book enough to raise it from an average rating to above average. It didn't sweep me up quite the way Here and Now and Then did, but it's worth sticking out the beginning — if you consider it slow, as I did — for the exciting latter part when it appears that the virus may be spinning out of control, again, and everything is going wrong. It's worth noting that I've already thought about rereading A Beginning at the End, so while I'm not giving it my highest recommendation, that latter half was thrilling enough to think about revisiting.

Also worth mentioning: Mike Chen's stories contain elements that I love (time travel; dystopia) but both of his books are, at their heart, stories about family being the most important thing in life. I love that. I will definitely watch for more by Mike Chen.


On a side note: What timing. I read A Beginning at the End in January, before the Coronavirus outbreak exploded. I wonder what Mike Chen thinks of what's happening. I keep finding myself reflecting back on the story. You get glimpses of what happened during the pandemic in A Beginning at the End, but it's told in flashbacks so there's a bit of distance. In fact, I did find myself thinking that I might have preferred a story about the pandemic to one about the aftermath. Then, I kind of got what I wanted in the second half when it becomes more tense, although there were plenty of surprises.

©2020 Nancy Horner. All rights reserved. If you are reading this post at a site other than Bookfoolery or its RSS feed, you are reading a stolen feed. Email bookfoolery@gmail.com for written permission to reproduce text or photos.
Posted by Bookfool at 12:33 PM