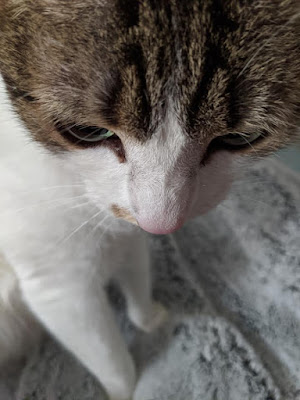 
None, hence the photo of a cat. I chose one that I thought made Isabel look sad ('cause no books), but she is not and was not. She was being a cuddle bunny, hanging out near me while I slowly woke up. I hope Monday Malarkey's arrivals section doesn't become too boring but I'm currently in anti-buying mode and that may be here for good, this time. When you're faced with your mortality, you start to look at possessions in a different way. I do have at least a couple pre-orders coming, though, and while I'm accepting fewer books for review, they'll trickle in on occasion.


I didn't end up sending on my copy of American Dirt because my friend got a copy and she's such a fast reader that we finished it around the same time. We had a great discussion. I'm hoping to post a summarized version of it with my review, along with some links to various articles about the book. The Lion and The Lyceum is a children's book that my younger son bought to send to his brother. It's an alphabet and story book centered on words and places familiar to Ole Miss grads. If you don't know Oxford, Mississippi, it's of no interest. I don't even plan on reviewing it because the potential audience is too limited. The Sun Down Motel is as great as everyone says and I'm looking forward to reviewing it, next week.


I've read 3 of the 4 books I'm touring in February (one per week is my current upper limit) so I picked up Crosstalk to squeeze in one off my shelves. It's about a woman who gets surgery to help her connect with her boyfriend and instead becomes telepathic. It's a little bit sci-fi, a little romantic comedy, and the only other book I know of by Willis that comes close to it is Bellwether, which I loved. It's a fun book, so far. I'm about halfway through it. Freedom is a Constant Struggle is one I bought last year and didn't get around to reading during Black History Month, so I'm excited that I happened across my copy at the right time. It's a fascinating combination of interviews and speeches by Davis regarding the intersection of American racism and oppression in other countries. She's for the abolishment of prisons because the entire judicial system in the US is biased against people of color but I haven't grasped what exactly she recommends doing with violent offenders.

And, I'm still reading The World of Sanditon slowly but plan to finish that in the next couple of days because I'd like to write about it with my post about Sanditon, the unfinished Austen novel completed by Kate Riordan to accompany the mini series. If you briefly saw (or managed to read) the review, last Thursday, it's because I decided to go ahead and pre-set the date for posting, although I wasn't entirely finished with the post, and I messed up the date. Oopsy. It will be up this coming Thursday.


Apart from that Thursday screw-up, which left me without a post on Thursday, I thought it was a decent blogging week.

I had some fantastic health news, last week. It's been like this: bad news with a good side, good news, bad news but good in a way, bad news, bad news, great news. Cancer is a rollercoaster of highs and lows, for sure. The great news is that something that looked bad turned out to be harmless, for now, although it will have to be watched closely. That means I get a reprieve from the constant doctor visits and tests, for at least a few weeks, and to celebrate we took a drive toward New Orleans, yesterday. There was a restaurant we planned to go to but we didn't make it because I still am an insomniac and it was a bit too far for a day trip. But, the place we decided to stop was great and we were both happy to get out and have a reason to celebrate on a spectacularly golden, sunny day. In fact, we decided to just call everything a celebration, this weekend, which meant celebratory reading while doing celebratory laundry, followed by a celebratory wienie roast over some slightly wet twigs burning in our little back porch fire pit. Sometimes, you just have to make your own joy in whatever way works best.

Totally forgot to mention that I'm still working on narrowing down my top reads from 2019 and it may still be a week or two but I will post them, eventually. I want children's books to be in the mix and I shelved those I kept (I donate quite a few of the children's books I review) instead of putting them in the favorites pile, so that's set me back a bit.

©2020 Nancy Horner. All rights reserved. If you are reading this post at a site other than Bookfoolery or its RSS feed, you are reading a stolen feed. Email bookfoolery@gmail.com for written permission to reproduce text or photos.
Posted by Bookfool at 4:06 PM