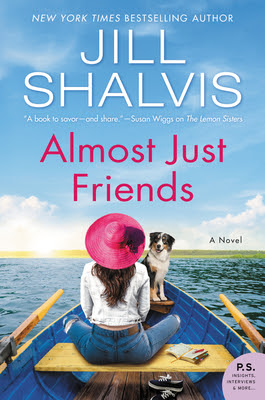 It's been years since I've read a Jill Shalvis book. Anyone out there remember Harlequin Duets? They were paperback books that contained two romantic comedies and I loved them. I'm almost certain that's where I discovered Jill Shalvis's writing.

In Almost Just Friends, Piper raised her siblings, works in EMS, and is fixing up the Victorian lake house and nearby cabins they own in preparation for selling. Her plan is to split the proceeds, go back to school to become a physician's assistant, and help her sister pay for college and her brother get a nice place of his own.

Then, all of a sudden, things change. During a massive storm, Piper goes to check on her diabetic neighbor and meets his handsome son, Camden. Piper is a little stunned to find herself attracted to Cam. Then, both her brother and sister, Gavin and Winnie, return home to stay. But, everyone has a secret and nobody wants to let Piper know what's going on. So, while her younger siblings are trying to work out what's next for them and the handsome neighbor is keeping at least one of their secrets, Piper begins to realize that maybe she has some work to do on communicating with her family, especially when it turns out they don't want to sell out the property at all.

I had some issues with Almost Just Friends, the main one being Camden's job. I couldn't make heads or tails of his combination of jobs. He's in the Coast Guard but he also gets called away on active duty for something-or-other. Or, maybe he gets called out on Coast Guard missions that are dangerous? It just confused me. I would have been happier if Camden had just had a normal job in the Coast Guard instead of the two conflicting things. I kept puzzling over how on earth the things he did worked together and whether they even made sense. At some point, I decided to try not to think too hard about what Camden even did for a living.

What I liked best about the story was the relationship between Piper and Camden, which quickly became one of comfort friends with benefits. They genuinely felt comfortable together and I felt like their relationship worked. I also liked the way the siblings fought. Sometimes, it was a little uncomfortably familiar, but I thought their arguments felt pretty realistic, if ridiculous.

Recommended but not a favorite - I really enjoyed Almost Just Friends, don't get me wrong, but there were little niggling things about it that bothered me – Camden's job, the timing of Winnie's issues, the pointless secrets being kept. And, at some point, it felt like the author tried to turn Piper's trauma into something similar for Camden. In other words, I felt like the story was uneven. But, I liked the romance and wanted the couple to get together. So, while Almost Just Friends is not my favorite book by Jill Shalvis, I still enjoyed it enough that I'd read more by her.

I received my copy of Almost Just Friends from HarperCollins for review. Thank you! Almost Just Friends is the 4th book in the Wildstone series but I have not read any of the other books and it stood alone just fine. So, if you're interested in the storyline, don't worry about the fact that it's a series book.


©2020 Nancy Horner. All rights reserved. If you are reading this post at a site other than Bookfoolery or its RSS feed, you are reading a stolen feed. Email bookfoolery@gmail.com for written permission to reproduce text or photos.
Posted by Bookfool at 7:01 AM

Email ThisBlogThis!Share to TwitterShare to FacebookShare to Pinterest
Labels: contemporary romance, Jill Shalvis, one in a series, recommended but not a favorite, stands alone fine, William Morrow