The Antidote for Everything by Kimmery Martin 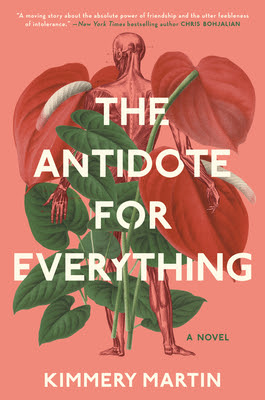 Rooney was about a thousand years old and still regarded women through a prehistoric filter where you told them the way it was going to be and they said, "Yes, dear," and went to iron some socks.

In The Antidote for Everything, Georgia Brown is a urologist and a bit of a rebel with her nose ring and discreet tattoos. Jonah, her best friend, fellow doctor, and the man she considers her only family, is gay and a little flamboyant with a tendency to sink into the occasional deep depression. As The Antidote for Everything opens, Georgia gets unwelcome news during a surgery and there are hints that something is amiss with Jonah. Then, Georgia flies off to Amsterdam and, after saving a life on the plane, finds herself madly attracted to her patient and having a nice little European fling.

When she returns, Georgia realizes that things are even worse than she suspected. Jonah's transgender patients, some of whom are her patients as well, are being told they can no longer be treated at the clinic and the administrators are trying to find a way to get rid of Jonah, as well. In fact, it looks like they may have grounds for firing him. Is there any way Georgia can help Jonah salvage his job and restore their transgender patients to their healthcare providers? Is it really legal to refuse to treat people who are transgender? What's going on with drugs that have been disappearing from the clinic? Is it possible Jonah has a drug problem Georgia doesn't know about?

OK, hmm. There are a lot more questions than that and then, of course, the simmering, long-distance romance between Georgia and Mark (the airplane patient), both of whom experienced similar losses early in life. The farther you get into The Antidote for Everything, the more complex the plot becomes and the more harrowing the events. Taken as separate ideas, I liked much of what this book is about. I liked the wit and humor (as in the quote above). I liked the three main characters. I liked the fact that it touches on a hot-button topic (discrimination against LGBTQ), and I thought the element of romance felt realistic. There's a lot to admire in The Antidote for Everything. The author is a doctor and her writing is sharp. She even managed to find a surprisingly large number of LGBTQ sensitivity readers to make sure she got it right.

But, I found the book was not as cohesive as I'd have liked it to be. I thought Kimmery Martin handled the emotions of attraction and how finding commonalities feeds into the magnetism between two people very nicely. But, the fact that Georgia and Mark spent most of their time on separate continents and because of that the romance was just an element threaded through the main story bugged me, for some reason. It sometimes felt like Mark was almost an afterthought. I also felt like the book made me a little too angsty. I'm not LGBTQ, but I have a lot of friends who are and the fact that our government is currently weakening anti-discrimination laws and removing rules or guidelines to stop discrimination is incredibly frustrating, primarily because it makes no sense to me. Why would someone be offended if their renter is gay? Why would anyone feel like baking a cake is participating in a wedding? They're just transactions. On that note, the pain of rejection is something I thought the author handled especially well.

Recommended - A timely topic, great characters, and much to discuss. I didn't fall in love with this book, but I liked it a lot and I think it would make a good book club selection if you're not afraid to tackle religious freedom vs. discrimination.

Update: I totally forgot to thank Berkley for the review copy. Thank you!!! I will seek out more by Kimmery Martin.