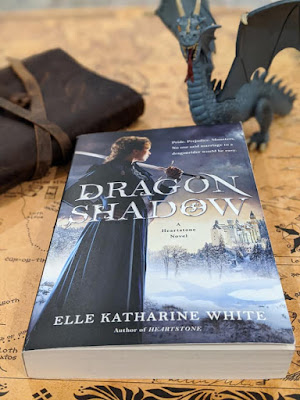 Dragonshadow by Elle Katharine White is the second in the Heartstone series published by Harper Voyager. In the first, Heartstone, Aliza Bentaine goes on some dangerous adventures and falls in love with a dragon rider when a group of Riders are hired to protect her home, Merybourne Manor, from a gryphon invasion.

In Dragonshadow, now married to the dragon rider, Alastair Daired, Aliza is trying to get excited about her duties in the family castle. But, she's kind of bored and in need of a different kind of challenge. When Alastair gets an invitation from House Pendragon to help deal with an unknown but deadly creature, Aliza insists that she must accompany Alastair. But, their destination is far to the north, she's not so great with heights, and Aliza will have to ride on Alastair's dragon over the dangerous Old Wilds.

Highly recommended - I had a couple minor problems with Dragonshadow. One is that there were a few too many creatures. I had trouble keeping track of them and then a little difficulty understanding the answer to the mystery (it took a little thought; I did eventually puzzle it out). This particular fantasy has a slightly over-built set of monsters, in my humble opinion. Having said that, I truly enjoyed the complexity of the plot and Aliza is a character I enjoy for her adventurous spirit. Plus, So. Much. Happened. Heartstone is a fantasy version of Pride & Prejudice, so there's a lot more interaction, manners, dancing. In Dragonshadow, it's all about the mystery of who is killing people and creatures, the dangerous journey, and why people are acting shifty, once Aliza and Alastair arrive. I enjoyed Heartstone but I liked Dragonshadow even better and I'm really looking forward to the third book in the series, which I plan to read soon.

My thanks to Harper Voyager for the review copy of Dragonshadow.