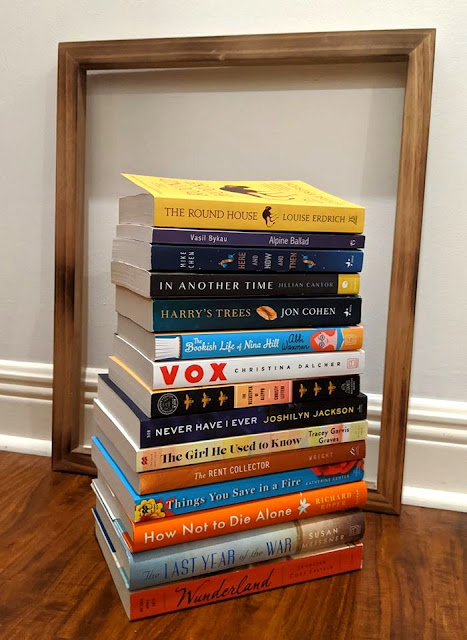 I may (or may not) do a separate post on nonfiction and children's favorites, later, but I decided I needed to go ahead and get this post done. In the end, I opted not to narrow down to 5 or 10 and instead just stack up every book I put in my favorites corner on the pile, but I can actually narrow down pretty easily, now that I've had time to stare at the stack and ponder. So, I've put an asterisk by each of my Top 5.

1. The Round House by Louise Erdrich - The mystery of a brutal rape and the teenage boy determined to solve it shines a light on how poorly the law works for Native American women due to the clash between Reservation law and that of non-Native land.

2. Alpine Ballad by Vasil Bykau* - A WWII story of escape from a Nazi prison camp into the mountains and the brief romance of two of the escapees is one of the books that has most firmly stuck with me. I have got to find more by this author. You can click through to read my review but I called it "heartbreaking and achingly beautiful".

3. Here and Now and Then by Mike Chen* - Time travel is one of my absolute favorite story elements and Mike Chen combined that element along with a dilemma about the family his time-traveling protagonist must leave behind to a stirring emotional level that's equally satisfying as a sci-fi.

4. In Another Time by Jillian Cantor* - Another book with a time travel element, this time a portal from Nazi Germany to the future. The author kept me guessing and the pages absolutely flew.

5. Harry's Trees by Jon Cohen* - When people asked me what my #1 read was in 2019, I always answered Harry's Trees. The story of a widow, a widower, and a little girl, there was just something magical and charming and transcendent about this book. It's a clutch-to-your-chest-and-sigh book. It's going on the good shelves.

6. The Bookish Life of Nina Hill by Abbi Waxman - Another charming read, maybe a little over-the-top but in such a fun way. Nina is bookish, has a cat, and is extremely organized. But, then her father's death opens up a new world and turns her perfectly ordered life on its head. So fun.

7. Vox by Christina Dalcher* - The book I was most worried about because of mixed reviews, Vox turned out to be so gripping that I was shocked at my inability to put it down. Very thought-provoking and timely. I'd love it if my book group discussed this one.

8. The Beekeeper of Aleppo by Christy Lefteri - Another book ripe for discussion, this time the story of a man who lived in a peaceful place until war drove him and his family out of the country. From happy family to grieving refugees, they seek a better life.

9. Never Have I Ever by Joshilyn Jackson - A stranger infiltrates a neighborhood book club, gets everyone drunk, and asks probing questions to set them up. But, she doesn't know what she's getting into, this time. I love Joshilyn Jackson's writing but I thought she reached a new level with this novel.

10. The Girl He Used to Know by Tracey Garvis Graves  - One of those books that was so gripping I told my husband I'd see him when I finished. And, yet, it was a relationship book, not a thriller! Wild.

11. The Rent Collector by Camron Wright - I considered leaving this one out of the favorites stack because I went back and changed my rating and its flaws seemed to have been mentally amplified over time. Still, as I was reading it I was so rapt that I remember how much I enjoyed the story. And, it did end up in the favorites corner. So, I decided to leave it.

12. Things You Save in a Fire by Katherine Center - I had to reread my review to remember what the conflict was in this story, but I still remember the tension and one particularly heart-pounding scene. I have not yet read a second Katherine Center book. I need to amend that. Though the story didn't entirely stick with me, the feeling I got from the reading did.

13. How Not to Die Alone by Richard Roper - This is a "house of cards hit by a puff of wind" type of book. What happens when you've lied about your life and then created an elaborate story around that inadvertent lie and you're about to be exposed? Funny, gross, moving. Loved it.

14. The Last Year of the War by Susan Meissner - One of three books I read that take place at least partly at a Japanese internment camp, a wonderful story of friendship that touched me deeply. I just loved it.

15. Wunderland by Jennifer Cody Epstein - Another story of friendship but one that sours during WWII when one girl finds out she's part Jewish and the other joins the Hitler Youth. Alternating with a story that takes place decades later, when the daughter of a German woman finds out her mother has died and digs into her letters to find out the truth about her past.

All of these books had one thing in common. They sucked me in and held me tight. While some stuck with me more than others, they all moved me or made me smile, took me to some magical place or made me think.


©2020 Nancy Horner. All rights reserved. If you are reading this post at a site other than Bookfoolery or its RSS feed, you are reading a stolen feed. Email bookfoolery@gmail.com for written permission to reproduce text or photos.
Posted by Bookfool at 11:04 AM

Email ThisBlogThis!Share to TwitterShare to FacebookShare to Pinterest
Labels: 2019 Favorites