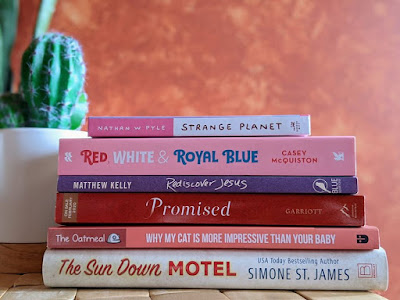 
OK, first things first. Strange Planet and Red, White and Royal Blue, the books purchased with a gift card, and the book from a friend, Why My Cat Is More Impressive Than Your Baby, all came from Alyce of At Home With Books (no longer an active blog but still listed in my sidebar because I choose to maintain a thread of hope that one day she'll return). She sent me the book and gift card because she knew I needed an upper and then recommended Red, White, etc. because it made her laugh. Thanks, Alyce! I cannot even begin to tell you how much the two I've read have already cheered me.

I don't know anything at all about either the author of Rediscover Jesus or the publishing company. I'll give it a go and see if it works for me but I don't know if I'll read it in its entirety. Promised is one I almost passed up but then I kept coming back to the description and thought it sounded so fun that I gave in. And, The Sun Down Motel is everywhere! The buzz, the reviews, the gushy love it has gotten are the kind of things that tend to put me off but I loved the last book I read by St. James and I'm looking forward to it. I'll probably read that very soon. My tour date is the 19th of this month, so you won't get to read my thoughts till then.


I really have never paid attention to "The Oatmeal", so I wasn't sure what to expect but while Why My Cat Is More Impressive Than Your Baby can be massively gross, there were plenty of cartoons that brought a smile to my face and a few that made me laugh out loud. Just what I needed. Strange Planet's artist is a fellow I've been following on just about every platform you can think of since I saw the cartoon with the little alien holding out a cat and saying, "The creature is vibrating," or something of that nature. I'd already happened across Pyle on Twitter and followed him, but for some reason (um . . . catlover, maybe?) that was the cartoon that made me a fan. I've been wanting to get his book for a while but had decided I'm done buying books. So, Strange Planet made it into my cart with ninja speed and efficiency when Alyce sent that card.

And, Dragonshadow was just as fun as the first Heartstone book, maybe better. In the first book, there are dances and other social interaction that mimic Pride and Prejudice, while Dragonshadow focuses on the adventure and mystery of what's killing people and other creatures and whether or not it's a bad idea for Aliza to tag along with her Rider husband on a job that involves flying over dangerous country on a dragon. I'm hoping to read the third book within the next two weeks.


I know I said I wasn't going to make American Dirt a priority, but things changed. A friend whose father was Mexican is the person whose thoughts I'm most interested in and the library queue for the book is long. So, I offered her mine and decided to read it as soon as possible so I can send it on. I wasn't sure whether or not I'd review it but actually . . . I have things to say and I don't think my perspective is necessarily harmful so much as lacking in the ability to view it in the same way as an #ownvoices reviewer (someone who really knows the subject, the language, the place, the correct social structure/interaction, etc.). I can only review it from the perspective of an average reader. And, there are things to say.


We watched a couple episodes of 800 Words, a couple of All Creatures Great and Small but I don't recall watching any movies at all. I just haven't felt like watching TV much, lately. If I do, it's all comfort programming – mostly older movies I've seen before. Wait, I did watch one old romantic comedy! 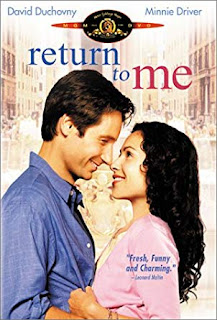 I think it was from about the year 2000? It doesn't feel 20 years old and yet . . . at the same time, it does. For those who haven't seen it, Return to Me is about a young woman who receives a heart transplant from a car accident victim, then falls in love with the heart donor's widower. It made me sob a couple times, but mostly happy tears.

It's February and I haven't mentioned favorite books from 2019, although I sort of planned ahead for that. I just noticed one of my favorites is not in the favorites pile. In 2019, I set aside my favorite books after finishing them but didn't start doing so till at least a couple months had gone by, as I recall. It won't be complete and it might be a little weird and indecisive because . . .  well, you know how some books you adore end up not sticking with you and some you didn't do the opposite? I may have to go over that favorites list to decide if I really have 10 favorites or I'm just such a mess that I should skip it. Opinions are welcome. I mean, I know everyone else photographed their piles in December. I just can't talk myself into writing up an end-of-month/year list or photographing favorites till the month or year is absolutely over -- as in, I'll literally wait till midnight to see if I finish One Last Book. Should I bother trying to pick my Top 10 from 2019? Too late?


©2020 Nancy Horner. All rights reserved. If you are reading this post at a site other than Bookfoolery or its RSS feed, you are reading a stolen feed. Email bookfoolery@gmail.com for written permission to reproduce text or photos.
Posted by Bookfool at 11:36 AM