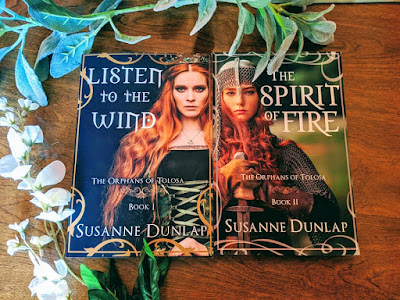 I've opted to combine these two books into a single review because they're the first and second in a series and this will be my last review of books read in 2019. Woot-woot!

Listen to the Wind is Book I in The Orphans of Tolosa, a historical fiction series that takes place in the 13th century in an area that's in flux, part of it being taken over by the French, part Spanish, part I don't know what. Where one's allegiance falls can mean life or death at any time.

Azelaïs and Azemar are orphans who look out for each other during the dangerous Inquisition that's taking place during this time period. There's a small but powerful group that considers themselves the only real Christians and everyone else is a heretic. Anyone can pretty much be branded a heretic at any time. When the two children and the other orphans with them must split up to avoid capture, Azelaïs and Azemar vow to meet in a nearby town. Years pass and they don't make it to the town because they're too busy surviving and learning, but neither forgets.

I don't want to give too much away, but Azelaïs (the female of the two) ends up with a nearly-blind monk, working as his eyes and pretending to be a boy. The monk teaches her about herbs, among other things, until something happens and she must run. Then, an entirely new life begins and eventually she is forced to do something to protect the woman who has taken her in from a life she doesn't want to lead.

Azemar is male and he goes on a very different path, at first learning about the workings of a winery from the field and then from a different angle. And, soooo much happens. No matter where they go or what they do, there is danger at every turn. Listen to the Wind was a 5-star read for me and I loved it so much that I got online to look for the follow-up book, immediately. At the time, it hadn't been released and I posted a mournful comment on Facebook. Susanne Dunlap replied that the second book, The Spirit of Fire, was due to be released in a week, so I pre-ordered it and got to it as soon as I could.

The Spirit of Fire, the second in The Orphans of Tolosa series, is every bit as fabulous as the first book about Azelaïs and Azemar.

Because the ending of the first book folds right into the beginning of the second, I feel like saying almost anything at all would spoil the story but it's adventurous, educational, heartbreaking, and hopeful. I felt utterly transported, so the horror of what happened at Montsegur (this being the focal point of the book, based on actual events in the 13th century) is painfully vivid. But the lovely ending is doubly satisfying after what the two main characters survive and witness.

Both highly recommended - Listen to the Wind is an action-packed, plot-driven tale of how two children survive and grow, find help, learn important skills, and fight danger while trying to figure out how to reunite in the dangerous Middle Ages. The Spirit of Fire takes the hero and heroine on a journey together . . . but then they're separated and . . . well, anyway, I did say I don't want to say too much. Suffice it to say that these two books are so incredible that I can hardly stand the thought that anyone might miss out on them. If you're a fan of well-researched, informative, adventurous historical fiction, these two books are absolutely not to be missed.

The third in The Orphans of Tolosa series is going to be a prequel. When I first heard that, I thought, "Oh, bummer, I'd like to see what happens to Azelaïs and Azemar. And, then I sat back, pondered, and came to the conclusion that The Spirit of Fire was actually a perfect ending for them and a prequel will nicely fill in the blanks about how the two orphans came to be abandoned and became friends.


©2020 Nancy Horner. All rights reserved. If you are reading this post at a site other than Bookfoolery or its RSS feed, you are reading a stolen feed. Email bookfoolery@gmail.com for written permission to reproduce text or photos.
Posted by Bookfool at 7:01 AM