Mini Reviews - Here and Now and Then by Mike Chen, Island of Sweet Pies and Soldiers by Sara Ackerman, and Angel in a Devil's Arms by Julie Anne Long

More minis! I've put my favorite of the three at the top, just in case anyone decides my reviews are boring and can only get through the first. It is soooo good. 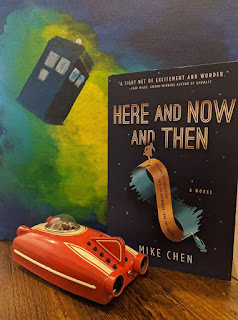 Here and Now and Then is about Kin Stewart, a man who was a time-traveling agent till he got stuck in the past for 18 years. Although it was against the rules to get involved in the time period he visited, after getting stuck in the 90s Kin got a job in IT, married, and had a daughter, Miranda. But, now he's back in 2142 and traveling through time again could kill him. When Kin figures out a way to email Miranda and then finds out her life is in danger in the timeline he's left behind, can he come up with a way to save her? Or, will he have to sacrifice himself trying?

Highly recommended - I loved the world building in Here and Now and Then but the main thrust of the story is about the importance of family, which I also loved. In fact, I loved the book so much that I immediately pre-ordered Mike Chen's next book, which is due to be released on the 14th of January (one week!!!) so I'm probably going to drop everything and read till my eyes pop when that arrives. The new book is called A Beginning at the End. I love Chen's titles.

There are some references to Dr. Who (although nothing overly exciting), hence the painting of the TARDIS in the background. And, that little car in the front is called a "car of the future" — it was a gift from my eldest and since they have flying cars in 2142, I thought it was appropriate. 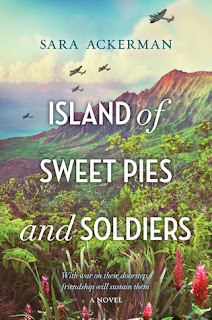 Island of Sweet Pies and Soldiers by Sara Ackerman is about a woman whose husband has disappeared and whose daughter is traumatized. It's the 1940s and America is at war. Violet and her daughter Ella are just trying to survive after the disappearance of Violet's husband, a year ago. Ella knows what happened to him but she's terrified and unable or unwilling to speak about what she saw. Violet doesn't know what's wrong with Ella, although it's not for want of trying to get her to open up.

When finances become tight, Violet and her friends come up with the idea to open a pie stand and sell pie at the local encampment of soldiers nearby on Hawaii's Big Island.

There's a lot going on in Island of Sweet Pies and Soldiers. Some soldiers Violet and her buddies befriend start hanging out at the house she shares and Violet becomes attracted to one of them but doesn't know quite how to behave. Is her husband alive or dead? She's devoted to her husband but it's nice to have the comfort of a kind man. Other things happening: a neighbor of Violet's with Japanese ancestry is arrested and then Violet is accused of spying. And, the soldiers have a pet lion cub whom little Ella becomes attached to.

What happened to Violet's husband and why does Ella refuse to talk about it?

Recommended but not a favorite - I had mixed feelings about Island of Sweet Pies and Soldiers. I liked it but I didn't love it. And, yet, I would definitely read more by Sara Ackerman so maybe the timing was wrong. I did love how it ended. 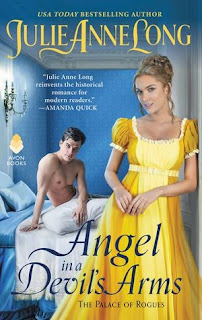 I read and loved the first book in The Palace of Rogues series by Julie Anne Long, Lady Derring Takes a Lover, but I don't know if anyone offered me the second book (I may have deleted an email offer when I was shutting down intake of review books). When I heard it had been released, I ordered Angel in a Devil's Arms because I so enjoyed Lady Derring's story.

Lucien Durand, The Duke of Brexford, was thought drowned in the Thames a decade ago but now he has returned to London in search of revenge. And, he's staying at The Grand Palace on the Thames.

Angelique has a painful history. It's only since her unusual partnership with Lady Derring, now happily married and still running The Grand Palace on the Thames with Angelique, that her life has become secure and comfortable. The last thing she needs in her life is another man to use and discard her. But, after a single kiss with Lord Bolt, she is conflicted and Lord Bolt's heart is lost to her. Can Julien convince Angelique that she's safe with him?

Recommended - Angel in a Devil's Arms didn't stick with me in the way that Lady Derring Takes a Lover did but I enjoyed it. My very brief Goodreads review says I thought it had great characters and a fantastic ensemble cast, most of whom are likable, but I thought the author occasionally lost the plot in this particular installment. I also said I loved it. So, I'll keep reading this series.


©2020 Nancy Horner. All rights reserved. If you are reading this post at a site other than Bookfoolery or its RSS feed, you are reading a stolen feed. Email bookfoolery@gmail.com for written permission to reproduce text or photos.
Posted by Bookfool at 7:04 AM

Email ThisBlogThis!Share to TwitterShare to FacebookShare to Pinterest
Labels: all recommended - some more highly than others, historical fiction, historical romance, Julie Anne Long, Mike Chen, one in a series, Sara Ackerman, sci-fi, The Palace of Rogues series, Time Travel, WWII