Ack! I've been away for so long that I almost forgot about my regular Monday post! My habit, last year, was to write up my Malarkey post on Sunday and then schedule it for early morning -- same as what I began to do with my review posts. I'll try to get back to that but it may take me a few days to get back into the swing of things. 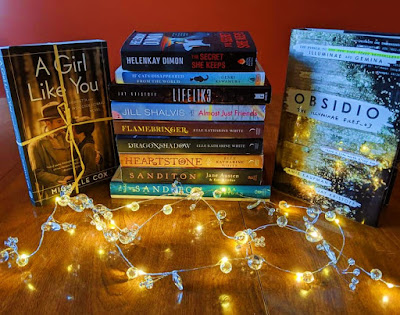 This is most of what I received in the mail (I managed to keep almost all the arrivals together!) while I was on break.


It was a surprisingly good reading break. Because I figured it was going to be a stressful couple of months, I decided in advance that I would let books call to me rather than focus on trying to catch up on ARCs. Now that I'm back, I'm in ARC-reading mode but I hope to take on fewer ARCs and will absolutely not continue accepting them if I start to fall behind, this year.

As to the books I read, so many of them were terrific reads. Some favorites were Here and Now and Then by Mike Chen, In Another Time by Jillian Cantor, Listen to the Wind and The Spirit of Fire by Susanne Dunlap, The Round House by Louise Erdrich, The Lost Man by Jane Harper, The Last Light Breaking by Nick Jans, and You Were There Too by Colleen Oakley (which I just finished a couple days ago).


I'm about halfway through, thanks to a night of insomnia. Next up will be Sanditon because the series airs on PBS starting this coming Sunday! Woot!


That's absolutely every post I put up after my last Monday Malarkey, from both this year and last.

We watched a lot of Hallmark movies, as expected, along with Elf and It's a Wonderful Life (colorized — a first for me). But, we also discovered that The Heart Guy (known as Doctor Doctor in Australia) has a 4th season available for viewing on Acorn, so I've been watching that. Husband has become weary of the medical programs and will no longer sit still for them but he's still a fan of Hallmark's less cliché movies; we do turn off anything that just doesn't work for us because it's too formulaic, although we both still enjoy yelling out elements if they're good enough to watch ("Dead parents! Old boyfriend! Planning the festival! Red dress — 'You look amazing/beautiful.' "). I can't recall what other movies we watched, apart from The Aeronauts on Amazon Prime, which we both enjoyed, although it was at times terrifying for those of us who are not fond of heights.

Christmas was very low-key. My new daughter-in-law was under the weather on the actual day, so it was just the two of us, but the newlyweds came to exchange gifts on the following day. While we didn't decorate as extensively as we did in 2018, we kept slowly bringing things out and we've been gradually working on undoing Christmas decorating for days. Somehow, we managed to misplace a storage box. I hope we'll find that, soon. I bought some cute little gnomes to put on the mantle and declared our Christmas theme "Gnome for Christmas" before realizing gnomes were a trend. When I found that out, I bought a set of gnome ornaments to add to the tree and a larger gnome to put on the entry table. It was a nice, silly theme that made us all smile. I even got a glass gnome ornament as a Christmas gift! How fun is that?

We were in bed by 9:00 on New Year's Eve and got a hilarious photo of our eldest granddaughter looking ruffled on the next day. Eldest son had awakened her to let her see the ball drop in Times Square at midnight. Judging from how she looked, that may have been an unappreciated gesture, even though he tells me it's what she wanted.

And, last but not least . . . my Goodreads goal is the same as last year's at 100. I've discovered that I like my goal to be a little lower than I know I can manage so that it's a fun way to keep track of books read rather than a stressor. I read 140 books in 2019.


©2020 Nancy Horner. All rights reserved. If you are reading this post at a site other than Bookfoolery or its RSS feed, you are reading a stolen feed. Email bookfoolery@gmail.com for written permission to reproduce text or photos.
Posted by Bookfool at 2:22 PM