Mini reviews - The Lost Man by Jane Harper, The Same Sky by Amanda Eyre Ward, and The Last Light Breaking by Nick Jans

It just occurred to me that I should use as much of the week as possible while I'm trying to quickly crank out reviews to finish up 2019, so I may go ahead and post on the weekends and/or skip Fiona Friday until I've caught up and posted my final list with links to all reviews from 2019. I'm going to wing it, for now. Husband may not let me get away with that, so we'll just have to see if that works out. I've just gotten my phone back from the store where I left it behind, so I will go ahead and post a Fiona Friday image, tomorrow. 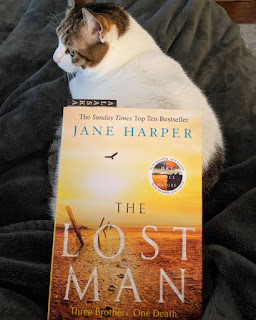 The Lost Man by Jane Harper is about three brothers. One has become an outcast and lives on a remote piece of his family's property. One feels like he's being treated like he's stupid and left completely out of the decision-making. The third was considered the responsible, likable one. He was married with two children but his body has just turned up in a very strange place, next to a lone grave and far enough from his car that it appears he may have committed suicide. But, something doesn't feel quite right about his death and the outcast brother decides to find out what really happened.

I don't have the book next to me but I remember the story well, if not the names of the characters. As in her previous two books, Jane Harper's Australian setting is practically a character in and of itself, it's so vivid. When she talks about the dust, the dryness, the heat, the way the fine red soil gets into the creases of one's clothing, it's so well described that the real world feels a little unreal for a moment, when you set the book down. The characterization is every bit as sharp. I am so impressed by Jane Harper.

Highly recommended - I was a little disappointed when I found out Jane Harper's third book wasn't going to star the police officer with a wounded soul but an honorable heart of the first two books but I shouldn't have been. I'm not a mystery fan but Jane Harper's writing absolutely sweeps me away. The Lost Man has a slightly slow beginning as you get to know the characters but once you've been introduced to the cast and the questions about the death have been posed, the story becomes absolutely mesmerizing. I continued guessing all the way to the end of the book and I closed the book thinking it was Harper's best. 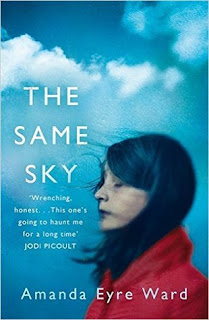 My copy of The Same Sky by Amanda Eyre Ward was ordered from Book Depository so just a warning, up front: that's probably the British cover. The publisher is Blackfriars, which sounds very British, but I'm just guessing. If you're American and this story appeals to you, be aware that you probably won't see this cover if you go looking for it.

The Same Sky tells two interconnected stories. One is the tale of a young Honduran girl who lives with her grandmother and twin brothers. Her mother lives in Austin, Texas and sends home money but after things deteriorate, Carla and her brother, Junior, are constantly starving. When he starts sniffing glue to help him forget his hunger, Carla knows it's past time to attempt the harrowing journey North. Will they survive?

In the second storyline, Alice is infertile due to breast cancer treatment in her college years and a baby she and her husband were going to adopt has been reclaimed by his mother. Is it time to give up on ever having a child?

It's pretty obvious how Carla and Alice's stories will intersect (Trigger Warning for rape) and, as is often the case in books with two storylines, I favored one over the other — the favorite being Carla's story. I didn't feel like Alice's story was entirely necessary but that's a personal preference. After I wrote that I was unsure why the author bothered to tell Alice's story, on Instagram, another reader and bookstagrammer told me she liked the story just as it is. I wondered if Ward showed Alice's side for the contrast. Alice and her husband have a successful business but feel their lives are incomplete without a family. Carla's family is scattered and struggling in ways mostly unimaginable to an American, so there definitely is a stark difference between their lives.

Recommended but I had mixed feelings - While I think immigrant stories are especially important at this moment, I felt like The Same Sky was a little too disjointed and that some of the elements should have been glossed over or eliminated entirely. I gave it 3 1/2 ⭐. For those who may be wondering, yes I've heard of American Dirt. In fact, I've pre-ordered a copy. I tried to win one (I don't know how many drawings I signed up for) but failed. Before I did so, I'd already pre-ordered it, anyway. It just means I have to wait till its release. 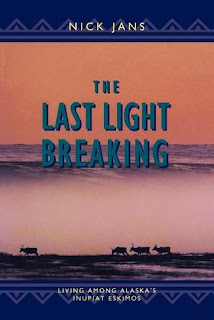 There's an interesting story behind how I found The Last Light Breaking by Nick Jans. About 10 years ago, the first time we went to Alaska on vacation, Huzzybuns neglected to book one night's lodging in the middle of our stay. Seriously, he just skipped that night. When he realized he'd messed up, the only place he could find for us to stay was on the opposite side of the Kenai Peninsula from where we were staying the rest of the time, in a former cannery. He booked it because he had no other options and it turned out to be a cool side trip because it was on the drive across the peninsula that we saw the one and only moose we encountered on that trip.

Our room in the former cannery was frigid (the thermostat set in the 50s) when we arrived but there was a little lobby area with corner seating where we could hang out while the room warmed up and a shelf of books on each wall for the guests to borrow. I flipped through a few before settling down to read The Last Light Breaking. I only read a single chapter (it's a series of essays about the author's life in Alaska with Inupiat Eskimos) but I was so impressed that I wrote down the title and author and put the book on my wish list. It took several years before I got a copy via Paperback Swap and I suppose it's taken me so long to actually read The Last Light Breaking because of all the ARCs I've given priority, over the years, but it finally called out to me during my winter break from blogging and I listened.

The essays in The Last Light Breaking tell Nick Jans' story (not in exact timeline order, but so well that it didn't feel like that mattered): how and why he ended up traveling to Alaska, his experience as a new guy (and not a native in a predominantly native region) in town, the jobs he's held, many of the trips he's made around the area to camp, hunt, fish, hike, etc., and what he's learned from his neighbors and friends. Nick Jans is an adventurer and a people person, so the book is particularly fun to read if you like reading about adventure, interaction, and what it's like to live with the Inupiat, who are among the few natives who actually are OK with the word "Eskimo".

Speaking of the word "Eskimo" and why it's not always OK . . . my son had a swim coach from Alaska. He was indigenous but Tlingit, from Juneau, not a people for whom the term "Eskimo" is used, so he considers it offensive if you call him an Eskimo.

Highly recommended - Stunning writing that will make you feel like you've been on an adventure with the author and convince you that the land is sacred. I will be looking for more by Jans and I wish I'd read him sooner.

When we were in Alaska, or maybe before, I read up on the native way of life and why they still consider subsistence living (hunting and fishing in the traditional ways for food, fuel, etc.) important so I had no problem with some of the things Jans did with his friends but I would caution the squeamish and anyone who objects to the killing of animals for any reason that there are a few graphic scenes that you might need to skim.