Mini reviews - Under the Jaguar Sun by Italo Calvino, Virus on Orbis 1: The Softwire by P. J. Haarsma, and If Cats Disappeared from the World by Genki Kawamura

I'm going to keep writing mini reviews where appropriate, although I'm closing in on catching up on reviews, finally! It's only taken me nearly a month. That's what you get for taking time off, I guess. 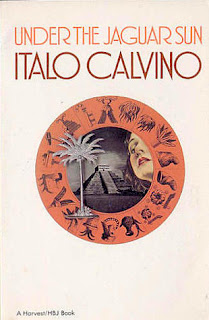 Under the Jaguar Sun by Italo Calvino was my first finished book in 2020. A slim read, it contains three short stories, each based on one of the senses. It was meant to contain stories about all of the senses, plus a frame, but not completed before the author died. Under the Jaguar Sun is my first completed Calvino. Oddly, I was loving If on a Winter's Night a Traveler when I was in the midst of it, a couple years back (and I get what he means by a "frame" from that). I'm guessing I had some ARC commitments that got in the way, at the time.

The first of the stories is about the sense of taste and it's a story in which a couple travels around Mexico, trying new dishes, seeing new sights. At some point, the wife begins to wonder aloud what happened to the hearts of those who were sacrificed. The implication is that she knows and is both appalled and intrigued.

Calvino strikes me as a real writer's writer. Such deft use of language! Because there are only three stories about the senses, the book is far from complete. It's still well worth the read, though. 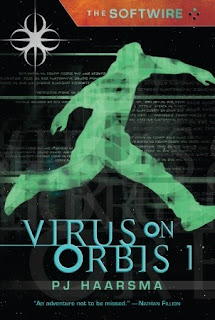 I downloaded Virus on Orbis 1: The Softwire for free and then heard Nathan Fillion recommended the series and downloaded a couple more. That was ages ago and what finally got me to read an actual e-book (an e-book!!! — if you read my blog regularly, you know I have a problem with them) was a middle-of-the-night wake-up and not wanting to disturb the spouse or get out of bed to go to the reading chair. It was a cold morning.

JT has a special talent. He can talk to the computer on the ship that's taking children to Orbis 1, a settlement on rings near a black hole. The adults are gone, killed by a problem with the pods that were intended to keep them from aging while the ship traveled to its destination, and the computer has raised and trained the children. Only JT can speak to Mother (the computer) without using a keypad.

When the children arrive at Orbis 1, they're distributed amongst the creatures (much like in the Star Wars café, there's quite a variety of aliens) to be used as labor. JT and his sister end up together, but JT is quickly identified as a "softwire" who can talk to and even enter a computer using only his mind. With problems frequently plaguing the Orbis 1 computer system, JT is blamed. But, JT knows there's something inside the computer. And, he must solve the problem quickly because his life is in danger as long as he's being blamed.

Neither recommended or not recommended - I might have abandoned this book (a middle reader, I presume) if not for Fillion's recommendation and the fact that I really wanted to know how JT would solve the problem with the computer. There's just a bit too much world building, if that makes sense. It's so far out there that I felt a little exhausted by it. But, the final third to half of the book is full of pulse-pounding action and that was enough to make me think, "Hmm, I will definitely read on." I probably won't get around to the second in the series until another dark, cold night in which I don't want to turn the light on, but I will definitely read on. 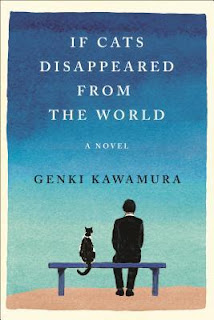 If Cats Disappeared from the World was my choice for #JanuaryinJapan (or is it #JapaninJanuary?) and, of course, the word "cat" in the title gave it first priority. The Japanese do love their cats, as do I.

The plot of If Cats Disappeared from the World felt a little familiar to me. A Japanese man with a cat finds out he's dying. What will happen? But, in this case, when the protagonist finds out that he's dying, he makes a deal with the devil. Each day, he can choose to have something removed from the world. Once the item is taken away, he gets a single day more of life. But, is there a line in the sand? If so, what is the hero unwilling to let the world do without?

Recommended but not a favorite - I thought the storyline was a little simplistic and predictable, a little schmaltzy, but I enjoyed it anyway. I think I might have liked it a little bit better if the hero had been rounded out a little better and if he'd had to consider a variety of items to possibly remove and choose from them. Instead, as I recall, he chooses the first thing that disappears from the world but then the devil makes the choice, after that. And, each of those choices becomes more difficult as they have some meaning to the hero.

Of these three books, none were favorites but I'd have to choose Under the Jaguar Sun as the best written and the one book whose author I most want to read again.