Mini Reviews - In Another Time by Jillian Cantor, The Roundhouse by Louise Erdrich, and Hotel on the Corner of Bitter and Sweet by Jamie Ford

More minis! And, all of these were excellent, all from my own shelves. Although Hotel on the Corner of Bitter and Sweet is an ARC, I didn't receive it from the publisher. 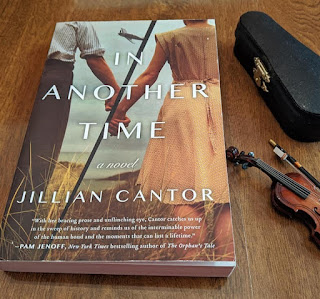 I just wandered around my house, looking for In Another Time in all the usual places for books I've read but not yet reviewed, and then it came to me . . . oh, I put it on the favorites pile. I loved In Another Time that much.

Hanna is Jewish; Max is not. When they fall in love in 1930s Germany, Max is worried about the growing anti-Jewish sentiment and Hitler's rising power. He wants to marry and leave the country. But, Hanna's musical education is too important to her and she's not concerned about Hitler. She thinks the Nazi party's rise is a passing phase.

In 1946, Hanna finds herself alone with no memory of the past 10 years of her life. Though she doesn't seem to know about it, the reader knows that there was a time portal in Max's bookshop. Did Max send Hanna into the portal and save her from the Nazis? If so, how did she lose her memory and what happened to Max? Why isn't he there with her?

Highly recommended - An utterly captivating and unique WWII story with a sci-fi twist. I went into the reading of In Another Time blind and was pleasantly surprised by the time travel aspect. I love a good time travel book. You don't know the truth of what happened till the end. Cantor kept me guessing all the way through the book. 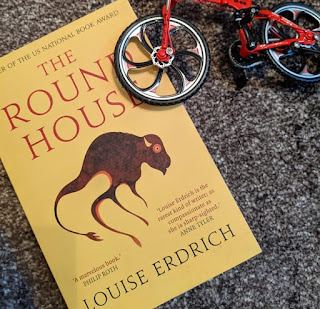 The Roundhouse by Louise Erdrich is a book that I bought and read at the request of a friend who wanted to hear my thoughts. I love it when that happens (a valid excuse to acquire a book I wanted to read, anyway). It's a book that was once offered to me for review but I presume I wasn't aware of how fabulous Louise Erdrich is, at the time.

When a woman is brutally raped and beaten, she is so traumatized and depressed that she can't talk about the rape and retreats to her bed. The police investigate but don't seem to be getting anywhere and her teenage son, Joe, is unwilling to accept the lack of progress.

Determined to solve the crime himself, Joe begins to investigate between biking around with his friends and working at his uncle's store.

Highly recommended - The crime is truly shocking but even more appalling is the fact that the raped woman is the wife of a judge and even he can't make sure that when a suspect is found he remains behind bars. Joe, meanwhile, is a fascinating character because he is so beautifully drawn. The story is told from his point of view and besides being very angry and confused about the crime and lack of progress by police, he's a typical teenage boy who is not a little obsessed with women and food, which took me back to the days when I had teenage boys of my own sticking their heads in the fridge all day long. I was very impressed by the authenticity of Joe's point of view.

My copy of The Roundhouse was published by Corsair, a British publisher. In the US, the publisher is HarperCollins and the cover is quite different. 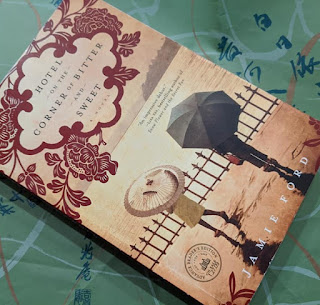 Hotel on the Corner of Bitter and Sweet by Jamie Ford is one of those WWII books that I have wanted to read for years. Why didn't I get to it, before now? I have no idea.

The story of Henry Lee, a Chinese American, Hotel on the Corner of Bitter and Sweet goes back and forth between 1986 and the 1940s. In 1986, Henry finds out the Panama Hotel at the corner of Seattle's former Japantown has a basement full of luggage left there by Japanese-American citizens who were rounded up and sent to internment camps after the bombing of Pearl Harbor.

In the 1940s, Henry and Keiko Okabe, a Japanese American, are outsiders at an elementary school and lovers of jazz who become fast friends. When people begin to panic after Pearl Harbor, worried that Japanese Americans will side with the Japanese, Henry's father forces him to wear a button saying he's Chinese to prevent trouble with authorities. His father dislikes Japanese people and insists that Henry stay away from Japantown. But, Henry values his friendship with Keiko and wants to help her in any way he can.

Back in 1986, Henry gets permission to search through the luggage to see if he can find a prized possession that he gave to Keiko. Henry is widowed and was happily married but he has never forgotten Keiko. Will the discovery of the luggage lead Henry to finally seek out Keiko? What drove them apart, years ago?

Highly recommended - A lovely and, yes, bittersweet story about friendship, music, racism, and the power of memories. So lovely. I didn't realize Jamie Ford is such a romantic. I expected something a little different, less sweetly touching. I'm glad I finally got around to reading Hotel on the Corner of Bitter and Sweet and I will definitely read more by Jamie Ford.