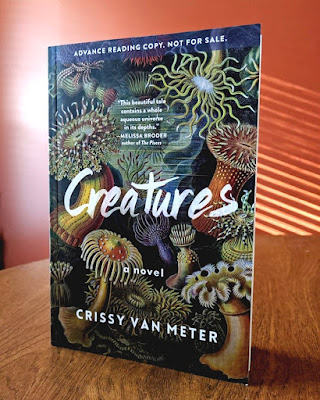 Creatures was the first book I finished after going on my blogging break. I presume it called to me loudly because of that gorgeous cover. Who wouldn't be drawn to it?

The story is about Evie, a woman who is on the verge of getting married as Creatures opens on fictional Winter Island, off the coast of California. Evie's mother left when she was young but has popped in on occasion. Her father was Winter Island's marijuana dealer. They moved from one apartment or house to another on the island, some better than others, dependent either upon whoever her father had befriended or his current financial situation, at the time. During one of their stays near a fancy vacation home, Evie met a wealthy, rebellious, and erratic girl who became her lifelong best friend.

Now, Evie's mother has just arrived in time for her wedding (which is to take place the next day). There's a dead whale caught on the reef and it's letting off a powerful stench. Evie is trying to think of a way to get rid of the carcass without breaking any laws, wondering why her mother has shown up when she's missed out on most of Evie's life, and pondering the possibility that her fiancé may be dead because he hasn't returned from the sea, yet.

From this opening scene, the book jumps back and forth in time, slowly revealing Evie's early life and influences. From the cover:

With wit, love, and bracing flashes of anger, Creatures probes the complexities of love and abandonment, guilt and forgiveness, betrayal and grief—and the ways in which our ability to love can be threatened if we are not brave enough to conquer the past.

Lyrical, darkly funny, and ultimately cathartic, Creatures exerts a pull as strong as the tides.

Recommended - I agree with that cover blurb. Immediately before opening a book to read, I avoid cover descriptions because I've read a few that completely ruined the reading by revealing important plot points that are better off left unknown till you get there, but after I closed it I read the description and thought it was close to perfect.

Although it's been 6 weeks or so since I read the book, I remember thinking Creatures was quirky but I liked Van Meter's craftsmanship, with one exception: her use of time. There is no strict timeline. In what appears to be the present day — the arrival of Evie's mother during the time a whale has become trapped and died close to shore — you are unsure whether or not the man Evie is supposed to marry will return or is even alive. From there, the author jumps back and forth in time so frequently (and with a tragic misuse of tense) that it can be very confusing.

And, yet, the narrative has great flow and if you're patient with the author's bouncing around in time, you'll find that she gradually fills you in on the events that shaped Evie: her father's drug dealing and her part in it, the people who offered her a sense of stability (if only for a short time), and the strange way her mother popped in and out of her life. Eventually the story moves beyond the day before Evie's wedding. If you can tolerate the confusing time leaps, Creatures is a strangely beautiful and satisfying read. I finished it on the morning of my surgery and I often have difficulty reading on stressful days, but I was completely absorbed. I gave it a 3.5/5 at Goodreads and will be watching for more by Crissy Van Meter.

I received an ARC of Creatures from Algonquin Books via Shelf Awareness in return for my unbiased review. Many thanks!