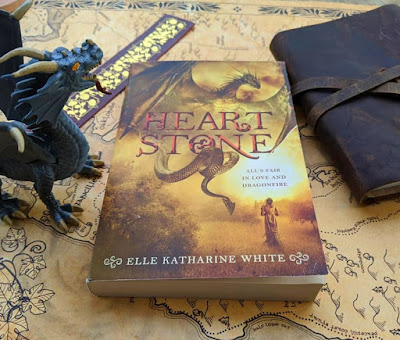 In Heartstone by Elle Katharine White, the first in a fantasy series, Aliza Bentaine and her family live in Merybourne Manor on the island of Arle. The area has been plagued by invading gryphons and Aliza herself has lost a sister to them. When the people of the manor hire a band of Riders to hunt down the gryphon horde, Aliza is both relieved and intrigued.

But, when the Riders arrive, Aliza's first encounter is not a positive one. She meets Alastair Daired, a dragonrider with a bad attitude. He's arrogant, handsome, and haunted. And, none too fond of her hobgoblin friends. Yet, they're thrown together in unexpected ways and gradually their opinions of each other change. What will happen when Aliza finds out Alastair may be the reason her beloved sister is heartbroken?

I don't want to go into too much detail because it's far too fun reading the unfolding story, but Heartstone is basically Pride and Prejudice with dragons. And, yet . . . there are times it's all about the social interaction but because it's also a fantasy with fierce battles between monsters and humans (there are some creatures that are friendly with humans, but most seem to prefer eating them or fighting with them), Heartstone is far than just P & P with dragons thrown in. It's a lively blend of action, adventure, and quieter scenes.

While I was reading Heartstone, I discovered that the author has posted lots of material about the creatures of her world online. That was incredibly helpful. I'm not a gamer or a big fantasy reader, so while reading about things like wyverns and beoryns, at first I had no idea whether they were something the author created or creatures that exist in other fantasy worlds. In the process of looking up things I was unfamiliar with, I discovered that some of the creatures are borrowed from the gaming world, some more common. So, gamers and fantasy lovers will likely already be familiar with most of the non-humans in the book. And, if you're neither, you can easily look them up online.

Recommended - I particularly loved two things about Heartstone: the fun of recognizing elements of Pride and Prejudice then seeing how the author put her own fantasy spin on them, making the story very much her own, and the adventurous side of the book. The farther you get into it, the more thrilling it becomes. For a person who generally has trouble reading fantasy, Heartstone was a pleasant surprise. I hope to read the 2nd book very soon.

Side note: Kiddo (younger son) has been intrigued by the sound of this series from Day 1, when the 3rd book arrived in the mail, and is anxious for me to finish the series so that he and his wife can read them. I always love it when he reads something I read because we enjoy talking books, so I'm also anxious to finish the series and pass it on to him. I can't wait to discuss the books with my son.


©2020 Nancy Horner. All rights reserved. If you are reading this post at a site other than Bookfoolery or its RSS feed, you are reading a stolen feed. Email bookfoolery@gmail.com for written permission to reproduce text or photos.
Posted by Bookfool at 3:06 PM