I love the cover of this book and I'm not quite sure why. There are more than enough 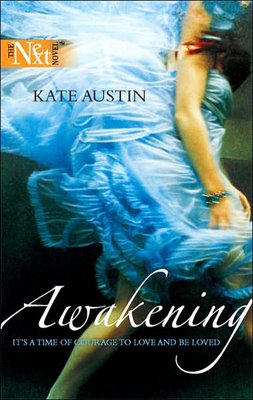 headless-female book covers around, these days. But, perhaps the combination of motion and flowing layers appeals to my eye. Regardless, I got this book in the mail very recently, but I read it when I did because the cover kept grabbing my eye.

Awakening, as it turned out, sucked me right in. Francesca Bond is exhausted, living in a rough neighborhood and barely surviving on the income from two jobs. She's heard rumors about a house that only appears on Midsummer's Eve, where people disappear for a year and come back healed. But it's not till she must run from three dangerous men on her frightening nightly walk home that she's faced with the welcoming lights at the end of a dark alley.

The beginning of Awakening had a wonderful other-worldly feel, with Francesca running through fog in a panic. However, about halfway through the novel, the setting began to feel a little trite and the plot dragged. Still, I loved the characters and cared enough to hang in there and find out what would happen to Francesca. While I don't think the house's setting and its relationship to Francesca's other home was fully thought-out and explained, there was never a point at which I felt like I was wasting my time. And, I wasn't disappointed. The ending returned to that mystical, almost paranormal swirl of sensations and concluded in a satisfying way. I had a terrible time putting it down, sneaked in some reading time at the swim meet (between my son's events) and in the car (while my camera battery recharged), then finished the book as soon as we returned from Louisiana.

There's a bit of romance thrown into the latter third of the book and my opinion of that was kind of neutral. I didn't like the couple's conclusion about how to handle their relationship - it just felt too contrived - and yet, I think the added character helped revive the story a tad, just as it was losing steam.

For the fact that it was so hard to put down, 4/5. And, I will definitely seek out future novels by this author.

Coming up next, a review of Holly by Jude Deveraux.

And, a quick anecdote. We still own the car in which I commuted to Oklahoma State University to finish my degree, over 21 years ago, after my husband graduated with his master's degree and moved us to Tulsa. When the elderly Nissan finally ground to a halt, hubby couldn't figure out how to repair the worst of its problems and it sits, unused, with tires that have lost their air and a coating of mold, ivy growing up and over the tires, on our driveway. While returning from errands, last night, we were discussing how we could possibly get rid of the car. I said, "Maybe we could dismantle it, piece by piece, and haul the pieces away. It doesn't function, and it's just sitting there taking up space, totally useless."

Son #2 jumped in, at this point. "It's not totally useless," he said. "It's home to many life forms." Oh my gosh. Never say anything that funny when I'm driving.

Hubby didn't think this was nearly as riotous as I did, because he once climbed into the car after we'd let it sit for a time (kept, for a while, as an extra car for when the eldest son began to drive) and as he pulled out of the driveway the interior of the car was suddenly filled with wasps. Not a great moment for him.

Okay, off I go to do my chores and possibly sneak in a few pages. I'm currently reading The Four Feathers by A.E.W. Mason and loving it. My stomach just made this huge, grinding noise. Oh, yeah. I forgot to eat breakfast! I guess I'll do that, first.

Review catch-up #3, coming up soon. At least, that's the plan.