The Christmas Strike by Nikki Rivers 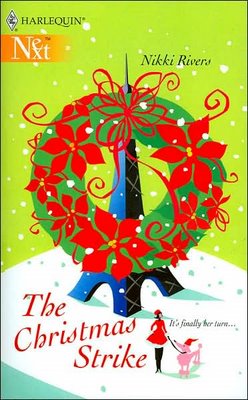 Abby Blake was widowed unexpectedly while living in her hometown, the one place she least expected to end up living out her days. With two young children to care for, she remained in her parents' house after their deaths, rearing her two daughters and slowly letting go of her dreams.

Now, at 52 years of age, daughter Natalie has moved home with her husband and two kids to make things meet after layoffs set them back. And, Abby's other daughter, Gwen, has decided to leave her husband.

Having the entire family back home would be tolerable if they'd act responsible. Instead, Abby is expected to cook and clean for everyone. Tired of their demands, Abby decides to go on strike and takes advantage of the chance to hitch a ride to Chicago on the private jet of Gwen's father-in-law, Cole Hudson.

But, Cole doesn't bother to tell Abby that Chicago is not his destination. Before she knows it, they're in Paris and she is having the time of her life. When sparks fly between Cole and Abby, she has an important decision to make. Who comes first? Should Abby fly back home to the family and her bookkeeping job and be satisfied that she managed to get away? Or is it time for Abby to think about herself for more than just a holiday?

I'm almost embarrassed to admit how much I enjoyed this book. While the writing is not in any way impressive and I didn't mark a single quote, I couldn't put the book down. Why? I can't quite figure that out. The storyline is almost bizarrely far-fetched and comes off as: "Small town widow has Pretty Woman fairytale experience in Paris." It's a little too tidy, possibly a lot too tidy and certainly a fantasy in many ways. And, yet, I cared about Abby and even though I was consciously aware that goofy things were happening and it was way too easy for this woman to find a way to zip over to Paris and maybe even go back to remain for a year (!!!), I couldn't put the darned book down. I even dragged it to a barbeque restaurant, where it was at risk of getting slimed (don't worry; it's still pristine) and read while the guys glared at me.

So, okay . . . not the best writing in the world, but it's definitely pure escapism and requires only light brainpower. Those are both positives for a seasonal book, in my humble opinion. I'd call it an average book, but given the fact that I gobbled it up in one day, I'm going to rate this book high for entertainment value.

Currently reading: Unexpected Daughter by Suzanne Cox - I haven't seen Suzanne for a year, darn it, but she's a sweetheart and I remember the group talking through this particular storyline with her at one of the Magnolia State Romance Writers meetings, before I abandoned all my writing groups. Yea, Suzanne! So far, I am loving this book!

Set aside: Earth in the Balance by Al Gore and Once Upon a Time by Gloria Vanderbilt. I'm in a seasonal mood, so I've set aside the heavier reads for later.

Just arrived: Finders Keepers by Linnea Sinclair. Thanks to Angela for sending this one!!! I used to correspond with Linnea and met her at a conference or two, but haven't spoken to her in many years. I'm really looking forward to reading this one.

Things our cats still have not learned, as of yesterday: You really can't catch that darned tail. And, the human truly does not want you to walk across the table to share the people food.

Bookfool who believes "My tuna is mine and mine alone." But, apparently not very convincingly.
Posted by Bookfool at 8:28 AM