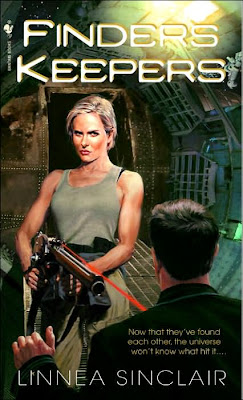 "Where's Khyris?"
"Being a pain in the ass somewhere, I imagine."
She laughed, completely surprised by the answer. "I am on the Razalka?"
"You are."
“And yet you feel free to call your captain a pain in the ass?”
“I have known Khyrhis for more than twenty years. I think in that time I have gathered sufficient evidence to support my conclusion.”
“I could probably give you some more, if you need it."
“My file overflows.”

"I threw a replicating weemly into the comm pack," she told him as the monitors in front of her flickered to life. "It's keyed to Thren's ID, but it may activate on its own."
"A weemly?" He was delighted.
"It would ride on all outgoing messages, link into the receiving comm pack, and replicate again."
"And?" he prompted.
"The only thing they'd be able to see on their screens would be a copy of my potato-cheese casserole."
"Everyone has always enjoyed that casserole when I've served it," Dezi said.

An unusual combination of romance and science fiction, Finders Keepers tells the story of independent star freighter captain Trilby Elliot. While repairing her ship on the uninhabited planet of Avanar, Trilby is surprised to see an enemy ship crash. Bent on salvaging parts, Trilby sets off for the crash site fully expecting to find a dead body. Instead, she discovers a barely-alive Zafharin military officer in a the remains of the ‘Sko fighter ship. Strange. Trilby carries him back to her ship for medical treatment with the help of her ‘droid, Dezi.

Rhis Vanur is a typically arrogant Zafharin, but there’s something that just doesn’t fit about him. Why was he in an enemy fighter? Nobody survives being imprisoned by the ‘Sko. And, why doesn’t he act like a lowly major? Trilby’s intrigued but not willing to fall for another man who appears to be well above her station in life. She’s already made that mistake and suffered when it ended. And, yet, the attraction between them is undeniable. When Trilby’s friend goes missing and Rhis offers to help her, both become targets of the ‘Sko. Will they get out of this alive? And, will love win in the end?

Loads of fun, with a fascinating universe and believable lingo. I loved little things like the term “wogs and weemlies”, which meant something on the order of hidden data alterations that keep infiltrators from stealing information or taking over a ship.

Many humongous thanks to Angela, the blog galaxy's coolest chick, for sending me Finders Keepers!!!

Currently reading: God is an Englishman by R. F. Delderfield

Thinking about: The lyrics to the song "Brother's Keeper" by Rich Mullins:


I just love that.

Off to the universe of Housework (not my favorite).
Posted by Bookfool at 3:39 PM