The Jungle Book by Rudyard Kipling 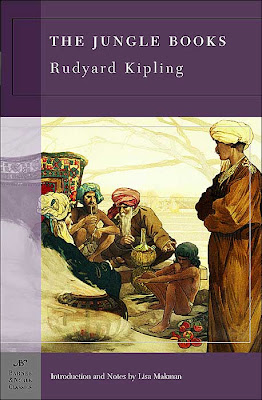 Kaa looked carefully till he found a discoloured crack in the marble tracery showing a weak spot, made two or three light taps with his head to get the distance, and then, lifting up six feet of his body clear of the ground, sent home half a dozen full-power, smashing blows, nose first. The screenwork broke and fell away in a cloud of dust and rubbish, and Mowgli leaped through the opening and flung himself between Baloo and Bagheera - an arm around each big neck.

"I am sore, hungry, and not a little bruised; but, oh, they have handled ye grievously, my Brothers! Ye bleed." -- from Kaa's Hunting

It is nearly always foggy at Novastoshnah, except when the sun comes out and makes everything look all pearly and rainbow-colored for a little while. -- from The White Seal

First, apologies for the delay in posting this review. We spent the weekend at a swim meet and I'd planned to post Friday night, but was too tired. Saturday, internet access was down at the hotel and Sunday we arrived home a little later than expected. More on our weekend, later.

I knew from the point at which I cracked open The Jungle Book to read its preface and table of contents, that it was a series of short stories and would likely be quite different from the usual, goofy, watered-down Disney fare. But, I also knew that Kipling had a terrific sense of humor and the prefeace confirmed that memory as Kipling, referring to himself as "the Editor", gave tongue-in-cheek thanks to an elephant and a string of informants who wished to remain anonymous. What a fun guy he must have been.

The first three stories were dedicated to Mowgli's appearance in the wolves' cave, where he would grow up surrounded by his adoptive wolf family. The wolves adopted Mowgli upon refusing to turn him over to the lame tiger, Shere Khan, who desired nothing more than to eat Mowgli and be on his way. Eventually, Mowgli would pay back those who protected him and the tiger, himself, for desiring to eat him.

Probably the biggest surprises were the fact that Mowgli could be a bit of a brat (really, quite well portrayed in the movie, but he was a little more contrary and a lot more clever than the Disney version) and the use of "thee" and "ye" in conversation, which made the characters sound a little on the King James Biblical side. I found myself mentally substituting modern pronouns to make the reading smoother.

The stories in The Jungle Book were every bit as exciting as expected. When captured by the Bandar-log (monkeys), Mowgli showed an unexpected presence of mind, using the protective Master Words of the Jungle, words Baloo taught him to use when entering new territory. "Mark my trail!" Mowgli called to the kite, Chil. Chil followed till the Bandar-log reached their destination, an abandoned town much like that of the cartoon movie, then sent a message about Mowgli's whereabouts to Baloo and Bagheera via the animal network. Baloo and Bagheera enlisted the help of Kaa, the 30-foot rock python, and barely escaped being hypnotized by his charms after the rescue was completed. Fascinating.

I loved all the stories, but I think my particular favorite was Rikki-Tikki-Tavi. I knew only little peripheral bits about that story and really enjoyed reading the tale about how a tiny mongoose saved his adoptive family of humans (apparently British) from a deadly cobra and the wife and unborn baby snakes who would happily poison the family and take over their house and gardens. It's a lovely tale of how great courage can come from even a tiny creature.

4/5 - but only because sometimes the language was a little incomprehensible (briefly) and I liked some of the stories more than others.

Note: This is not the correct image. My book cover says The Jungle Book (singular - this one is plural, which I thought was a bit odd) and is an illustration of a leopard. The leopard is not a black leopard, as Bagheera is described, so it was technically inaccurate. But, I do like it better than the image shown, above. However, this was the only one I could get to load at the correct size, so it's a satisfice and I guess we'll just have to live with it.

I was slow to finish The Jungle Book (not to mention how long it's taken to getting around to the review) but not for any reason other than flightiness. I have more Kipling sitting around the house and enjoyed The Jungle Book so much that I may scoot one of the other Kipling books up onto my Classics Challenge list - partly due to the fact that I seem to have misplaced Peter Pan. Sigh. I really hate being blonde, sometimes.

We spent Saturday and most of Sunday in Laurel, Mississippi, where youngest son had a swim meet. Kiddo did exceptionally well on both Saturday and Sunday. He took as much as 8 seconds off his previous swim times and improved in every single event! 6-8 seconds reduction is a huge improvement, so the youngster was pleased (but famished - he is a teenager, after all) when all was over.

On the drive down, we stopped at a roadside fruit stand that we've admired on previous trips and bought a few interesting items: some particularly pretty tomatoes, salted peanuts in the shell, pickled quail eggs, and a gourd to make into a bird house. Fun! Unfortunately, spouse pulled around a truck just as we were closing in on the turn-off and had to enter the fruit-stand parking lot at a ridiculous rate of speed. I was certain that we were going to do a James Bond and send both vegetables and people flying. "Too fast, too fast!" I said between gritted teeth. "Yeah," husband said as he applied the brakes and avoided plowing down an innocent Southerner. "I thought so, too."

Just finished: The Summer of My German Soldier by Bette Greene. Review forthcoming.

Still reading: God is an Englishman (yes, sigh, still only about halfway or so . . . this has been a tiring week), and Stitch 'n Bitch (got to the casting-on part and panicked, thinking maybe I should wait till I'm home to attempt casting on, and possibly find a knitting friend).

I was most disappointed to find out that Harlequin is discontinuing its Silhouette Bombshell line, a series of stories with kick-ass action and strong heroines. Darn. Just when I find a line I can get behind, Harlequin shuts it down! The Next series, which I've been avidly reading, has gone to a smaller publication rate. Hopefully, they won't go by the wayside as well, but I'm not holding my breath. I am, I know, far from the typical romance reader; the longest-lived lines are generally the ones I can't stand to read. Ah, well, that's not surprising but it's annoying. The same seems to hold true regarding favorite scents at smelly bath-product stores. I've recently decided to stop myself from even entering one such bath store because every time I find a product I love, they discontinue it. Grrr. Sandalwood and then mint shampoo, country apple wet wipes . . . all gone. Damn stores. I've returned to Ivory soap, cheap apple shampoo and baby wet wipes for the car. I already miss that lovely apple scent that wafted through the car's interior when we got out the wet wipes, which were replaced by antibacterial hand gel. Whoever made the decision to switch obviously has never had sticky fingers. You can't wipe gunk off with gel, people.

Anyway, that's my rant for the day. End of rant. It's safe to keep reading, now.

We stopped at Borders to have fun spending gift cards, on the return trip from Laurel. I'll try to get a photo of my purchases posted, later on.

Hope everyone else had a peachy weekend!!!
Posted by Bookfool at 12:22 PM