The Rest Falls Away by Colleen Gleason

Max looked down. He noticed the warm yellow had dulled at their feet. A cloud was moving 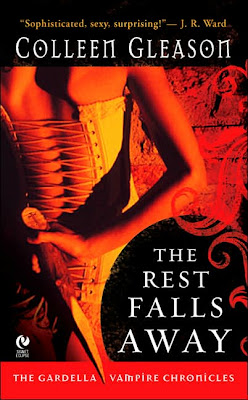 over the sky and soon would block the sun. Their sanctuary would disappear.

"I don't supposed you thought this through any further," he said, brandishing the sword at a younger undead who dared take a step toward them.

"I was rather hoping that, since I got us this far, you'd have an idea."

The smoke was getting thicker, and some of the furnishings were starting to kindle. It would be a very short time until the entire room erupted in flames; the dry, rotting curtains that hung at the black windows were already suffused with angry orange and red tongues.

On the eve of her society debut, Victoria Gardella Grantworth finds out she must decide whether or not to continue the family legacy of Gardella vampire slayers. She chooses to be trained to fight and slay vampires, to become a “Venator”; but when the Marquess of Rockley steals her heart and a powerful vampire plots to gain unspeakable power, Victoria is torn between love and duty.

This is the paragraph you don't want to read, unless you don't mind spoilers. You have been warned:

A fascinating, adventurous combination of Regency historical, paranormal thriller, and romance that was gripping to its shocking conclusion, the book leaned more toward romance in its first half and then veered more heavily to the paranormal thriller side in the latter portion. In fact, my die-hard romance-writer friends would rail about the sad ending, as a romance is technically a happily-ever-after story. Believe me, I got that drilled into my head when I hung out with romance writers.

Regardless, it was a unique combination that kept me turning the pages. Normally, I shy away from vampire tales; but, I wanted to read the book because Colleen is one of ours, so to speak, in the blogging world. Of course, we all adore her and she's nice. You know my policy: Buy books written by nice people, whenever possible (and definitely attend their signings, if you can). When I came across a copy in the local bookstore, The Rest Falls Away passed my "flip test" with flying colors - every sentence I read, as I flipped through, randomly, grabbed me. So much for not bringing home any new books.

I was glad I broke that little rule. The Rest Falls Away was beautifully written, loaded with action and didn't become gory or disturbing until close to the end. I tend toward easily-triggered nightmares, but this novel didn't cause me any trouble and was loads of fun. If not for the fact that I opted to do a ton of housework while the guys were away, this weekend, I wouldn't have put it down at all. But, I did and the house is a lot cleaner, thank goodness. It was getting scarier than a vampire novel. Still, I was enthralled and very pleased because I'm scrupulously honest in my reviews and I sure didn't want to say anything negative. That would pain me. Since I'm not a regular vampire-story reader, I can't say how it compares to most but I liked it better than the only other vampire book I've ever read: The Nymphos of Rocky Flats. There is a little bit of graphic sex, which y'all know is not my thing, but I coped. See, I'm fine. Look. Don't I look terrific?

Now reading: Crispin by Avi and I'm about to get back to God is an Englishman but don't hold your breath that I'll finish it anytime soon.

Just walked in the door: The Sex Lives of Cannibals by Maarten Troost and Cloud Atlas by David Mitchell (uh-oh, Chunkster Alert).

Best moment of the day: Not to sound old, tired and repetitious, but it has to do with yet another hawk. I loaded one of the cats, Miss Spooky, into her carrier and took her along for the school pick-up routine. She was surprisingly quiet and relaxed - very unusual, as she's my yowler when it comes to vet trips. Anyway, on the return home we passed a hawk sitting on a phone wire by the road. There were no cars behind us, so I briefly stopped the car to allow kiddo and myself a longer look. The hawk had its head turned to the side, the reddish feathers on his crown rippling in the breeze. It was just such a glorious sight.

I don't know if we have a large influx of raptors during the winter or they're simply more visible when the leaves are off the trees, but we've seen them almost every time we leave the house, recently. Neato. Yeah, yeah, I grew up in the 70's.

Recent discovery: I found my missing Nabokov!! Six months? I think that's how long it took to show up. Gosh, how embarrassing. Okay, this is not totally weird because my husband is kind of an absent-minded professor type and there are only certain things he can be bothered to remember, but apparently he found it - and has no memory at all of doing so. Still, it appeared quite unexpectedly on top of a pile of books. "No, babe, it wasn't there last week. I know you found it. Where? I just want to know where it's been all this time!" said I. "I don't remember finding it. Sorry. It's just another book to me." Big sigh. Hope to get to that one soon, as it's one for the TBR challenge; I've had it close to forever.

Watched this weekend: Three movies - so unlike me, but I had a lot of laundry to fold and I do so while watching movies: You, Me and Dupree (hmm, pretty fun but more rude than I'd like), Crash (wow) and About a Boy (again - love it, love it, love it; big Nick Hornby fan, here).

Gettin' cold (it's all relative, I know - the grass is still green, here). Gotta go curl up with a cat and a good book. Stay warm!
Posted by Bookfool at 3:38 PM