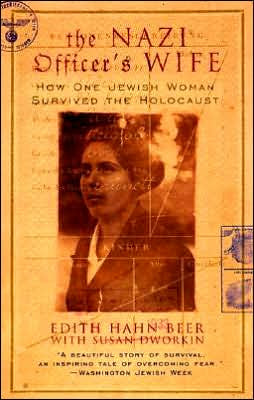 The Nazi Officer's Wife is the true story of how one Jewish woman survived life as a "U-boat", a person living just under the surface of society under an assumed identity. As the title indicates, Edith Hahn eventually became the wife of a German who later was made a Nazi officer.

*Possible spoiler warning*: I don't think anything I've mentioned in this review will truly spoil the reading, but I've revealed a few things that I found surprising. So,if it's on the agenda right away, you might want to skip over the review. Then again, you might not. I can't tell from here.

Back to the review . . .
I enjoy reading about the experiences of people who lived through WWII. This book offered a slightly different perspective. I’d never heard the term “U-boat” in reference to a person living in plain view of Nazis. The time spent living with a German and then marrying him was actually only a small portion of her experience. Prior to acquiring a copy of her friend's papers and moving away from Vienna to work for the Red Cross (the safest place for a person under an assumed identity to work), Hahn lived in a work camp harvesting asparagus and other foods and in a paper factory, cutting boxes. She and her co-workers actually thought that being sent to Poland was the only way they might be reunited with their families and hoped they’d be among the fortunate workers allowed to leave. Knowing what happened in Poland, of course, it’s shocking to read about how clueless people were in regard to what was happening to their friends and family.

It was only when Hahn was led to a woman in the Nazi party - by a friend from the work camp who received packages from this same woman and knew she was trustworthy - that Hahn was able to borrow a friend’s identity, move to Munich to work for the Red Cross, and then later meet and marry an "Aryan". There were some interesting complications, even after Edith Hahn became Grete Denner. Edith's friend, Christl Denner (Margarethe, shortened to "Grete", was one of Christl's middle names), was still living in Vienna and receiving her rations, so there were certain documents and ration cards that Hahn couldn't get her hands on without exposing both herself and her friend.

I found Edith Hahn's story absolutely gripping. It’s unfathomable to me how terrifying it must have been to be a Jew or other person considered an adversary to the Nazis anywhere in Europe during World War II. To live out in the open or to help others in any way obviously required a great deal of courage and cunning. The Nazi Officer's Wife is an excellent read, very clearly written and utterly fascinating.

Also finished: The Jungle Book by Rudyard Kipling - first book completed for the Classics Challenge. I hope to review that one tomorrow. Raking up oak leaves has zapped me of my youthful energy.

Haven't touched in a couple of days: The Chunkster. But I plan to return to it, tonight. And, I've resumed reading Once Upon a Time by Gloria Vanderbilt. I believe I set this one aside in December for lighter reading material. It's been fairly easy picking Once Upon a Time up a third of the way into the book. I remember most of the people in Gloria's childhood circle and the rest are slowly coming back to me.

Just walked in my door, yesterday: A Lotus Grows in the Mud by Goldie Hawn. Okay, yes, I helped it walk inside. The postman also helped by sticking it in the mailbox. I sometimes wonder if the friendly local postal worker senses me standing at the window, watching to see if he sticks any book-shaped parcels into the mailbox. Probably. He never has to ring the doorbell for the big boxes.

At this moment: Cat #1, Miss Spooky (who is black with white trim and has owned me for approximately 12 years) is freaking out. She's turned up her nose to every kind of cat food I've offered her, today, both wet and dry. She has just batted a coin across the floor and bolted from the room, after crawling under the futon (where she let out a decisively whiny meow) and running around the house knocking things down, occasionally hesitating long enough to emit one of those pitiful cries that mean, "You don't love me enough to give me shrimp, lightly breaded, with a dab of cream cheese! Or, tuna. I love tuna! Don't I deserve tuna? Look at me, just wasting away before your eyes." Uh-huh. 4 bowls of cat food, 3 bites from each and I'm supposed to feel bad. Can anyone relate to this feline guilt trip?

Best thing that happened, today: The kiddo came out to help me rake. We'll just overlook the bit about him tossing the leaves on me instead of into the bag. At least he came outside. When I say I try to take joy in the little things, sometimes I'm really pushing it.

Got the latter part of the title "Stitch 'n Bitch" down. Need to work on the stitching part.