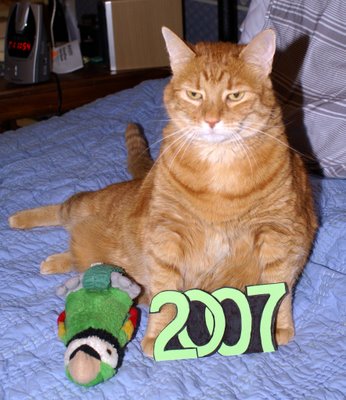 I gave up on the concept of cutting out 88 pieces of paper and asked the spouse, "Could you create a random generator that will pick a number between 1 and 88 for me, so I don't have to sit around writing numbers and cutting?" He said, "Sure." Okay, now you know why having nerds around the house comes in handy.

Wendy of Musings of a Bookish Kitty is the winner of the first Chunkster Challenge drawing for a tote bag to haul the chunksters around. Congratulations, Wendy! Sunshine the New Year's Kitty and Great Huntress of Stuffed Parrot is thrilled for you. Isn't she fierce?

I will attempt to keep this post on the short side due to the little gnomes with jack-hammers banging away inside my skull (aka, migraine) but a brief update.

Chunksterville: I'm bogged, kiddos. I keep hacking away at God is an Englishman and I like the book, I really do. But, I'm constantly reminded of why those weighty suckers intimidate me: detail. Too much detail. Admittedly, I used to write great flouncing prose, myself. But, confidentially, my own writing bored me silly. I got over it, I think. I hope (the flouncy writing, not the boredom with my own writing).

Still working on The Jungle Book and occasionally picking up Stitch 'n Bitch. According to Debbie Stoller, I've got a nice little hunk of yarn in a decent blend. I rewound it at 2 am, one night when I couldn't sleep, turning it into a center-pull ball. It's one of the coolest things I've done all week, which probably goes to show you just how interesting my life is. I shall try not to dwell on it.

Added to my current reads, today: The Nazi Officer's Wife by Edith Hahn Beer. So far, it is utterly gripping.

Just walked in my door: Hey Nostradamus! by Douglas Coupland

In the year 2007, I resolve not to bring home any books that begin with this kind of sentence:

Phelan McDermott leaned back in the leather wing chair and scowled at the American grandson of his mother's new husband.

Any book that makes me feel like I need to draw up a family tree to translate the first sentence is, I've decided, worth passing up.

Stupidest thing I've done, recently: Assumed that when I updated my email address at Blogger it would actually work. Public apologies to the many people who wrote to me via the email link that went to the email address which I neglected to check for over two months thinking my email had been diverted to the home inbox. How's that for a run-on sentence? I've added the folks who were unable to post a request to join because my blog was set to allow only people with Blogger IDs to comment and . . . you know, the email thing I forgot about. Non-Blogger-bloggers may now post with abandon.

Remember that fizzy business? I used a fizzy from Crabtree & Evelyn, tonight. It's been sitting at the back of a cabinet for at least two years; as far as I know, we no longer have a C & E store in Mississippi since our one and only store moved out of Northpark Mall. Now, I really miss them. But, wowee, what a surprise to see not only a lovely, blue-dyed fizz but a bunch of brown stuff that looked like grass clippings floating in my tub. As it turned out, they put lavender - the real stuff, not just the oil or scent - into the fizzy. There was also some other herbal hodge-podge I didn't recognize (chamomile, maybe?), which I chased around. I mushed some of the lavender and whiffed it. Oh, my. I forgot just what an amazing, heavenly, soothing scent comes from the real plant. And, that other weedy-looking brown crap smelled pretty sweet, also.

Note to former and latter-day hippies: Sorry, no, probably best not to roll it up and smoke it after you sift the lavender out of the fizzy.

But, I'm going to bed. You can do it without me for tonight.