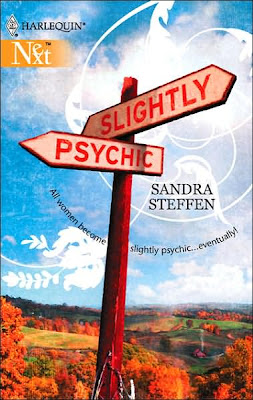 Lila was of the opinion that people who hoarded saw potential in everything.

Opening her eyes again, she said, “It’s no use.”
"You’re in the South now, Missy, and that attitude just won’t do.”

How could Lila have thought she needed quiet?
What she'd needed was this calibration of calamity, this free-for-all chorus of voices raised just to be heard, of questions that often went half-answered, and hungers that were never assuaged for long.


Lila knew she was slightly psychic, but she couldn’t possibly have predicted the trouble her waking vision of an heiress in jeopardy would get her into. Humiliated on national television, her life goes dramatically downhill, her psychology practice dying away till she’s left with no choice but to move on and start a new life.

A surprising inheritance leads Lila to small-town Virginia, accompanied by her best friend, Pepper. Peace and quiet are all Lila believes she needs after months of media scrutiny. Instead, she walks into a new life with an unexpected and noisy bunch of Southerners, along with a few who won't say much of anything, including Joe. Everyone thinks Joe murdered his wife, but nobody knows for sure. Can Lila and Joe learn to trust, again? And, what really happened to his wife?

I liked this book and read it in one day, primarily because we were in the midst of a gloomy downpour (on Thursday) and inertia kept me from doing anything else. I was glued to the futon, rooted and weary - a book potato, I guess. Anyway, I did enjoy the hodge-podge of characters. The story was the usual turning-over-a-new-leaf with a nice twist and well done. However, there was just something missing. I'm not even sure I can put a finger on what it was, although I do know there were some little things that bothered me. I had trouble visualizing a few of the characters, for example, in spite of their constant presence.

I also had a little trouble with tense in the above review. If you're a Grammar Queen (or King), please forgive me. I'm a little tired, this week, so I think I'll quit hyper-editing and just post as is.

I wouldn't advise against reading the book; I think it was enjoyable. Steffen's writing is good, the book has some nice, witty dialogue and I loved the small-town quirkiness of the characters. I'll look for more by this author; this title simply wasn't my favorite of the books I've read, recently.

Rating? Hmm, above average at 3.5/5. Speaking of which . . . I'm considering doing away with my rating scale and simply saying "recommended" or "not recommended". What do you think? Opinions?

Currently reading: God is an Englishman . . . getting close to page 200, but I set it aside for a couple of days. Still enjoying it.
The Jungle Book by Rudyard Kipling - for the Classics Challenge. From Disney Fluff to the Real Stuff. Also enjoying this one.
Stitch 'n Bitch: The Knitter's Handbook by Debbie Stoller - because the family gave me a beginning knitting kit (with yarn, needles, and lousy instructions) for Christmas.

Did I mention?: The cats bought me a sweater for Christmas and they have excellent taste. They chose a white sweater, upon which the shed fur would undoubtedly stand out if I let them climb on me whilst wearing it lying down. But, I don't think I'll do that.

One thing I learned in 2006: Always look inside the little bank envelope before tearing it in half and tossing it in the trashcan. And, get rid of the dollar bill with scotch-tape up the middle as fast as you can.

One thing I've already learned in 2007: If you're going to go to a coffee shop for the free high-speed internet access, be sure to scope out where they keep the bathroom. That caffeine can go through you like a shot.

Speaking of high-speed access, I checked out the high-speed internet in both the library and our new coffee shop, today. Hmm, definitely something hinky with my ISP causing the blog-viewing trouble. I only had time to visit a few blogs (it's a little unnerving having a spouse stare at the wall while you type) but the ease was startling.

While at the mega illusion-of-discount store: I looked at bath fizzies and soaks. And, a woman passing by said, "That's great stuff, that bath soak. My daughter loves it. Now, I prefer the fizzies, myself. But, be careful when you use them. One time I sat down in the bathtub and the bath fizzy had shrunk to about this size." She held up a hand, fingers apart to about quarter width. "And it popped right up my butt. Woo-hoo, that was a funny feeling!"

Did I want to know that? Did you? Don't tell me I don't share the most interesting anecdotes with you, because that was by far the most unique and mind-boggling thing anyone said to me, today.

Off to read. If you use a bath fizzy, tonight, watch where you sit, please.
Posted by Bookfool at 7:07 PM