Once Upon a Time by Gloria Vanderbilt

In our tweed skirts and buttoned-down-the-back Brooks Brothers cardigans, we stood around and sniffed at each other in an offhand way, as yet no alliances formed, no sides taken, no scapegoat selected. All had equal chance--or so it seemed as warily we waited, each in her own way, fat or thin, for the other to make a first move. 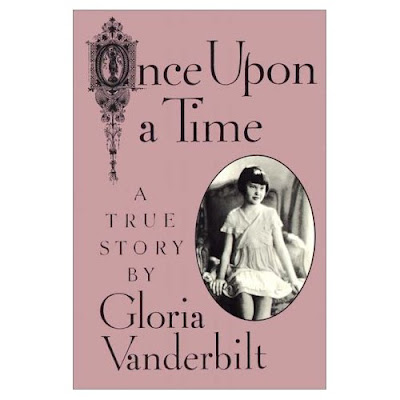 This is an older book, published in 1987, and one that I just happened across at our library sale. I picked it up after reading Anderson Cooper's book, thinking it would be fun to read more about his family history, and then set it aside for Christmas reads and recently returned to it.

The story of Gloria Vanderbilt’s childhood--focusing particularly upon the desperate wish to get her mother’s attention--the tale of Gloria Vanderbilt's childhood is one of decadent extravagance, inflated self-importance, confusion and loneliness. One could almost feel sorry for her; but it's difficult to sympathize, much less empathize with a girl whose inheritance was valued at $4.5 million in the 1930's.

As memoirs go, Once Upon a Time is unusual in that Gloria Vanderbilt tells it through the eyes of a child. It’s almost like she’s channeling “young Gloria”. The result could be either fascinating or annoying, depending on who is reading; I found it fascinating, for the most part. The reader not only glimpses the lifestyle of a Vanderbilt - pampered virtually beyond comprehension, constantly in the public eye, friends with celebrities and royalty - but also gains an understanding of her feelings as a child who lost her father at a very early age, was neglected by her mother and then endured a confusing custody battle that resulted in the dismissal of the one person she felt she could completely trust.

By the end of the book, I got the sense that it would be awfully difficult to grow up being shuttled from one enormous estate or ritzy location to another--surrounded by the wealthy and famous--and turn out the slightest bit normal. And, it was almost as if Gloria was trying to prove that to be the case. Vanderbilt's mother (also named Gloria) was an erratic nomad: beautiful, vain, constantly craving attention, possibly even mentally unbalanced. In many ways, the elder Gloria reminded me of a well-known, jet-setting heiress whose name I'm not even willing to type--in part because of the dearth of character she exhibited. While young Gloria seldom asked about her father, those few times she got up the nerve, she didn’t succeed at obtaining much information. Her mother, on the other hand, was seldom present and utterly baffling. Obviously bent on trying to find a similarly wealthy second husband, she spent all her time traveling, partying, buying clothes and moving from one exotic location to another, always surrounded by friends and relatives and never showing any interest at all in the rearing of her only child.

Overall, a very interesting read that occasionally wasn’t quite descriptive enough but still kept me turning the pages. I thought the book was very readable, but I have mixed feelings about it and, therefore, am giving it a "very good" rating but not putting it in the "recommended" category.

Now reading: The Rest Falls Away by Colleen Gleason - loving it, so far.

Weekend doings: Having a combination read-in and clean-in weekend, as I'm on my own for two whole days and free to do whatever I please. How cool is that?

Chunkster progress: None since Wednesday. I'll get back to it soon, I'm certain.