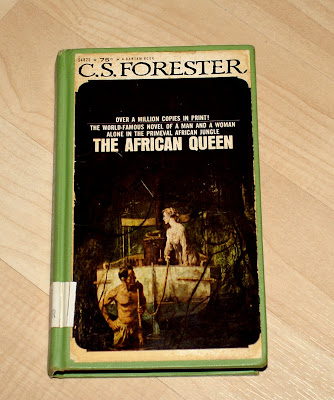 “We nearly done it that time,” he said; she could not catch the words because of the noise of the river, but clearly he was not discomposed.
Allnutt was acquiring a taste for riverine dangers--rapid running can become as insidious a habit as morphine-taking--apart from his new happiness in Rose’s society. Rose sat on the gunwale and kept her feet out of the water. She would not let her weakness be seen; she forced herself to be matter-of-fact.

In 1914, after Germans capture the local African villagers to train as soldiers and her missionary brother dies, Rose is left alone in an empty, isolated village in German Central Africa. When the man who delivers mail and supplies to their village, Charlie Allnutt, arrives, she insists that they must head toward the lake where the Konigen Luise (a German boat) patrols, to blow it up in the name of England. Rose and Charlie find love and adventure as they attempt to reach the lake at the end of the Ulanga River.

What I loved about this book: the language, the adventure, the romance, the visceral sense of life on an African river and the many perils the characters encountered. The author--also the author of the Horatio Hornblower series--was obviously very knowledgeable about boating, so the feeling of time and place along with the details of the workings of the African Queen (a flat-bottomed, 30-foot launch) and the descriptions of Africa really rock. My husband has read two of the Hornblower books and I definitely plan to read them.

What I didn't like: the ending. I'm afraid the ending was a huge let-down; in this regard, the movie is quite a bit better. I don't want to spoil the ending in any way, so I won't elaborate. I followed up the reading of the book with a viewing of the movie.

One item of interest: Charlie Allnutt is an English Cockney in the book, a far cry from the "Canadian" played by Humphrey Bogart in accent, but equally cheerful and loquacious.

I'm quite curious how other people feel about this book, so if you've read it please leave a comment and tell me what you thought. I enjoyed it enough to give it a high rating despite its ending.

The photo above shows my copy of The African Queen, which was discarded by the library eons ago and, therefore, qualifies it for the TBR Challenge as well as the Classics Challenge. Yippee to that!

Up next: A review of The Captain and the Enemy by Graham Greene and lots of housework. Blecch. You wanted to know that, right?

Anecdote of the day: While waiting for the pharmacist to fill a prescription for my husband, I overheard a woman talking about her mother's health. Mom was better but still not doing well, said the woman; and, unfortunately that meant she had to keep Mom's dog.
"It's a . . . a . . . what do you call that kind of dog? It's a Hilton! You know, the kind that heiress has?"
The pharmacist stared at her for a second and then said, "A chihuahua?"
"That's right!" the woman replied, pleased, and then she frowned. "Yappy little monster. I wish my mother would get better and take her dog back."

I really should get out more. You just never know what you're going to hear in the real world.
Posted by Bookfool at 1:50 PM