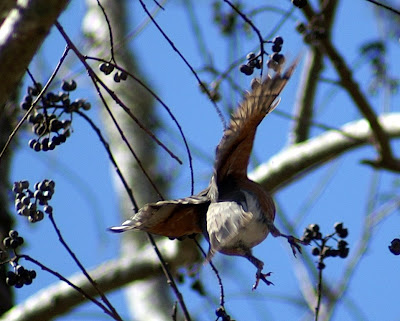 I've finished a second book that I've yet to review and I'm falling behind, but this was just one of those days that I felt like the robin, above. I just wanted to say, "I'm outta here." So, with that in mind, we grabbed the camera, hopped in the car and took a long walk in Vicksburg's National Military Park.

I am so freakin' sore. I've been a bum, lately.

But, I just had to drop back in to describe the hopelessly romantic thing my husband did for Valentine's Day. Bear in mind that he is, in general, just about the most unromantic guy on the planet. Before we were married, my spouse just about never gave me flowers (maybe once) but he did once give me a cactus. So, the fact that he made Valentine's Day special is kind of . . . baffling.

Anyway, hubby sent me an email on Valentine's Day. "Happy Valentine's Day. Pay homage to Beethoven and there might be something worth finding." Probably most people wouldn't get that and, frankly, I forgot what it meant. Paying homage to Beethoven is a reference to a British mini-series my husband and I love, Oliver's Travels. Whenever the main character is near a piano, he plays middle C as his homage to Beethoven. But, like I said, I forgot. So, I went to the piano and looked inside and behind the Beethoven music book. Nothing. I thought about looking in the bench but I had a horrible night and I was sluggish. I took a nap.

Since I failed (and I whipped out an email to that effect), later on the hubby gave me another clue. "Okay, then look in the bench." Quite a clue, eh?

Inside the piano bench was a DVD of The Sting (an old favorite) with a note that said, "Behind the Tower Bridge might be something." That one was easy. We have a framed photograph I took of the Tower Bridge in London on top of one of our many bookshelves. I moved the frame and behind it was a a lovely package that contained all sorts of adorable little bath items with a royal theme, including a package of bath salts with instructions on how to use them ("First, summon a servant . . . "), champagne lip balm with a touch of strawberry, a notebook for royal decrees, etc. Fun.

Attached to the package was yet another note: "To Edinburgh you go to find something to go with your ginger beer." That was another easy one, but darned if he didn't send the short wife to all the hard-to-reach places. We have a stoneware ginger beer bottle that I purchased in a shop in Edinburgh - very common, I think, but unique to us. And, it's on top of another set of bookshelves so I had to climb, but behind the ginger beer bottle was a heart-shaped box of fudge. Whoa. Like my butt needed that - but, how sweet is he for thinking ahead and planting all those little gifts?

So, in spite of the fact that the hubby was gone from Sunday to Friday, I had a lovely Valentine's Day that I'll never forget.

Hope everyone had a lovely weekend.
Posted by Bookfool at 9:59 PM