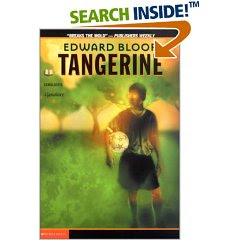 Paul Fisher has terrible eyes and can’t remember exactly how his vision was damaged. Because of his thick lenses, he’s often teased. But, Paul is an even-tempered teenager and just wants to play soccer. If only his parents would notice that he’s an athlete, and a good one. But, they’re too busy focusing on his older brother’s football career to notice what’s going on in Paul’s life.

Erik Fisher is a natural at kicking a football with great distance and accuracy. His father is bent on making sure that Erik gets the chance at football that he never had. Apart from Paul, though, nobody in the Fisher family is willing to face the fact that Erik Fisher has some serious problems.

When the Fishers move to Tangerine, Florida to pursue what Paul refers to as “the Erik Fisher Football Dream”, they have a few surprises in store. In Tangerine, underground fires burn continuously, lightning strikes every day at the same time, and the tangerines that gave the city its name are almost completely gone, burned to make room for housing developments. As the Fishers deal with the oddities of life in Tangerine, the truth about Erik is slowly revealed while Paul deals with the challenges of school, soccer, home life, and the sharply different backgrounds of his teammates and friends.

I really enjoyed this book, to the point that I picked it up one day and finished it the next, unwilling to put it down for long. However, it does have some fairly substantial inaccuracies, according to a friend and my own understanding of civil engineering as a profession. Paul’s father is a county engineer who is so highly paid that his family lives in a huge house, virtually a mansion. While there’s corruption in the county where the story is set, I still find it hard to believe that a civil engineer working for a county would be hired at a high enough salary to live like that, especially with a non-working wife. I’m married to a civil engineer and it’s simply not a high-paid profession unless you're willing to go to hazardous areas (Bosnia, Iraq, etc.) or work ridiculous hours at a consulting company - neither of which Paul's father did.

Another problem has to do with Erik. I think it was troubling that the parents in this book were so disinterested in their youngest son and focused on the eldest. Erik's problems unfold rather slowly, but it's obvious early on that the grown-ups are deliberately blinding themselves to what's going on in the lives of both of their children outside of Erik's football. I think that happens, but I find it hard to believe that on one end of the scale you have Paul, who is a decent, hard-working and unprejudiced teenager and, at the other end of the scale, Erik is pretty much the opposite extreme - not just not a nice person but possibly even psychotic. How on earth could the same set of parents raise two such different people? It's possible. But, Paul's mother was particularly confusing. I couldn't get a fix on her and certainly couldn't relate to her blithe disinterest in her children and their lives.

When I originally wrote part of this review, I gave the book a 4/5. But, I've rethought it. There were enough bits that didn't work for me that I'm going to knock it down another half notch - not much, since I did find myself glued to the book, but just a bit. I still recommend it. Tangerine is a young adult novel.

The sign fell down!!! Can you believe that after my silly post about that sign (pictured below), it was on the ground just 4 days later? I thought about picking it up and handing it to the ranger. But, I was hot, tired and sweaty. I went home and took a bath, instead. I'm really worried about all those potential stick-people injuries.

They're everywhere! Kiddo had to go to the doctor for a portion of his swim camp physical, which he couldn't do last week because of the fact that he lost both pairs of glasses. And, what did we see as we pulled into the parking lot? A hawk, of course. I grabbed my camera, which I've been carrying on sunny days, and slung it around my neck, signed the kid in and said, "See you in a little bit." Then, I dashed out and took photos of not one but two red-tail hawks circling. They were pretty far away, but the tails were a dead giveaway and it was certainly a lot more fun watching the hawks than it is to sit around listening to the soap opera characters holler at each other.

What's up with that? I'm still getting an abbreviated task panel, even with new posts, so I'm not sure what's up with Blogger but I still can't highlight and color. Darn. I also see a funky HTML code rather than a photograph when I upload pics. Hmmm. Methinks Blogger is being freaky. Most of these bits of weirdness do seem to disappear after a while, so Bookfool is exercising her patience skills.

Coming up next: A review of First Light by Geoffrey Wellum and possibly a trip to AmazonUK because I observed that Wellum's commanding officer from 92 Squadron (where Wellum was posted during the Battle of Britain) has also written a memoir. How cool is that?