God is an Englishman by R. F. Delderfield 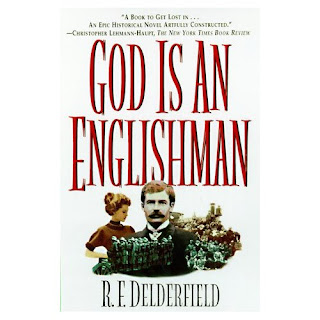 The old Colonel could not have said when or why the premonition touched him, causing a small, inward shudder. He was not given to premonitions and today, with a June sun flaming in a cloudless sky, was not a day for gloomy thoughts. And yet the prescience was there, formless but real, and once it had appeared uninvited and unwelcome, it remained, a silent, brooding wraith standing a yard or two behind his right shoulder, refusing to go and yet refusing to leave cover and identify itself as anything more than a shade.
They were a generation of men who had grown to maturity under a small, plump woman ruling large slices of five continents. Perhaps this helped them to accept her invasion of their spheres of influence.

God is an Englishman tells the story of Adam Swann, a soldier turned tradesman who builds his business from the ground up and learns about love and humility from his growing family.

I tend to dislike epics unless they’re quick-moving, with lots of action, and there were times I put this book aside for up to a week without picking it up to read a single chapter. The sections in which Adam Swann’s business are described in detail can be a bit of a yawn; and, Adam has a tendency to talk in huge paragraphs. There’s not a lot of white space in God is an Englishman. There are also a large number of characters to keep track of; and the story of Adam Swann’s rise is less fascinating than the smaller stories within the story.

However, while the detail can occasionally be tiresome, what distinguishes Delderfield’s writing is the sense of time and place. Set in Victorian England during an eleven-year period, 1857-1866, the story firmly entrenches the reader in the atmosphere. I could easily imagine the little urchins working at the mills or sleeping near the Thames in muddy clothing. I could hear the sounds of horses clomping, harnesses jingling and people shouting, see the pall of smoke and feel the cold and damp, smell the unwashed and impoverished masses. And, the characters were, for the most part, so easy to distinguish that even a week of setting the book aside didn’t cause any trouble with resuming the story.

While I would have happily given up at the beginning because of frustration with the business detail, it improved in the second half. I did think the main character was a bit of a snob and didn’t care for the way he pontificated (he could be condescending and blunt to the point of tactlessness) and looked down his nose at his wife; but, I also understood that the author was trying to show how people were treated during the time period and he got his point across. Overall, an excellent read. There are three books in the Swann series and I would like to read them all.

Up next: A review of The Red Badge of Courage, which I read entirely off a computer screen. Miserable, yet . . . fulfilling.

And, just to make you smile, a quick anecdote:

Youngster brought home his school photos, earlier this week, and pulled them out of the envelope without actually handing it to me, as if he planned to keep them.
"Mr. H. said he wants one of the big photos of me," he said.
I looked up at him from the futon, perplexed. "The larger photos are for grandparents and parents," I replied very seriously. "Smaller ones are for aunts and uncles and friends."
I should mention that Mr. H. has known kiddo since he was in elementary school, as he was the director of our favorite summer camp. Over the years, the youngster has spent a lot of time telling Mr. H. goofy jokes and they've gotten to know each other pretty well.
But, still. "Why does he want a large photo?" I asked.
Youngster grinned. "Because he needs a new dart board."

This is why I love being a mother.

More later, assuming I can keep the kid off my computer. Apparently, I have a better graphics card than the old clunker we let him use. Darn.
Posted by Bookfool at 6:57 PM