The Captain and the Enemy by Graham Greene 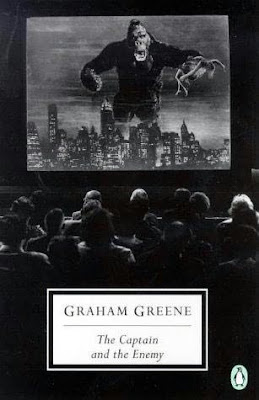 "You can go now."
I turned my back and began to make for the classroom where I was overdue.
"I meant go with this gentleman, Baxter . . . What class do you miss?"
"Divvers, sir."
"He means Divinity," the headmaster told the Captain. He glared at the door across the quad from which wild sounds were emerging, and he swept his black gown back over his shoulder. "From what I can hear you will miss little by not attending." He began to make great muffled strides towards the door. His boots - he always wore boots - made no more sound than carpet slippers.
"What's going on in there?" the Captain asked.
"I think they are slaying the Amalekites," I said.
"Are you an Amalekite?"
"Yes."
"Then we'd better be off."

12-year-old Victor Baxter is taken out to lunch by a stranger who produces a note of permission from Victor’s father (aka, “the Devil”) on his birthday. While eating, the stranger--whom Victor comes to know only as “the Captain”--informs the child that he was won fair and square in a game of backgammon and then takes him to stay with a timid woman named Liza and changes Victor’s name to Jim. Because his mother is dead and Victor, now Jim, has never been happy either at his boarding school or with the aunt who has agreed to care for him between school terms (the Devil is seldom present), the boy accepts his kidnapping without complaint and even finds himself fairly happy living with a shifty man who is very likely a thief and a woman who has been damaged by an encounter with his own Devil father.

I was so curious as to other readers’ feelings about this book that I made the mistake of going to Amazon to read reviews, midway through reading The Captain and the Enemy. Big mistake; the first review contained a major spoiler. Don’t go to Amazon to read reviews unless you're willing to have a plot spoiled! I did, however, learn that this was Graham Greene’s final novel and that it’s not considered his best by the readers who left reviews. Reading on about Greene, elsewhere on the net, I discovered that Graham Greene was bullied in boarding school and eventually sent away to London for therapy and a change of pace. Aha! He began to sound much like Victor . . . or, rather, Jim.

I found this an easy and absorbing read and I liked it but must admit that the story was profoundly weird. In the end, I understood that it was a tale that aimed to point out how love can come in different forms. It was a sad, strange novel, very tragic in many ways and quite possibly even more bizarre toward the end; but, I liked the writing and if this were my sole introduction to Graham Greene, it would be enough to tempt me to read more by the author.

I was under the mistaken impression, in fact, that this was my first Graham Greene book. But then I looked up his writings and was reminded of another title, which I read many years ago: Travels with My Aunt. Nothing in that book stuck with me, although I do recall the cover was lavender. Hmmm.

3.5/5 - I thought the book was above average, as it read smoothly and I felt pulled in. I desired to know what would happen to Jim, whether anyone would bother to search for him, who the Captain really was, and whether or not Liza and the Captain would ever profess their love. But, it was also a little twisted and definitely tragic, possible too abrupt in its ending. Not excellent, then, but worth a read.

I don't think this one's a classic, but it's one that's been on the TBRs for a time - yea! One more knocked off the TBR pile!

Yesterday, I watched The Guardian while doing Nordic Track and read bits of Firehouse by David Halberstam. Okay, I'm going to need another upper, soon. I feel a fluff break coming on. Not that Alice in Wonderland isn't plenty light and flaky, but . . . you know. Romance with a happy ending sounds nice. And, maybe another bookmark-making break. I'm still terrified of casting-on; so, 6 weeks post-Christmas, I'm stopped dead on the concept of beginning to knit. There's something about that double casting-on method in Stitch 'n Bitch that confuses me completely. Knitters may feel free to drop by my house to give me a quick lesson. Suddenly, being a hermit seems like a bad thing.

Okay, I'm off to dig up the bills that need to be paid. Happy Thursday!
Posted by Bookfool at 8:00 AM