The Red Badge of Courage by Stephen Crane 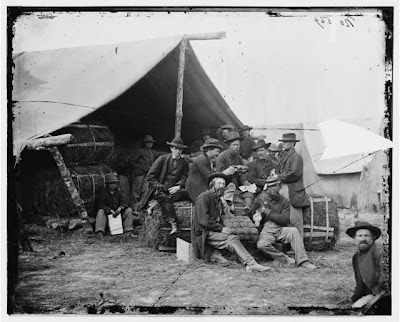 The rushing yellow of the developing day went on behind their backs. When the sunrays at last struck full and mellowingly upon the earth, the youth saw that the landscape was streaked with two long, thin, black columns which disappeared on the brow of a hill in front and rearward vanished in a wood. They were like two serpents crawling from the cavern of the night.

The Red Badge of Courage is the tale of one young soldier's feelings during the (American) Civil War, as he wrestled with his fear and dealt with the reality of battle.

Sarah of Book Buff in Oz gave me the best capsule description of The Red Badge of Courage: "A simple yet compellingly human portrait of a young man at war." Absolutely perfect; thanks, Sarah. I mentioned in my earlier, whiny post, that I enjoyed reading the book immensely - even though there was a heavy use of vernacular and I read it on-screen. In fact, the book was so compelling that I eventually sank into the futon with my laptop and a pile of pillows to finish it off and then looked up cover art, reviews, and information about the book.

What I discovered was fascinating. Several reviewers mentioned that Stephen Crane didn't experience the Civil War first-hand and they found it surprising that he described a young soldier's experience so vividly. At a site specifically dedicated to The Red Badge of Courage (which, unfortunately, I failed to bookmark), the reason for his colorful portrayal became plain. When Crane read several newspaper accounts of Civil War action, he was sorely disappointed to find that the soldiers described their personal experiences without emotion, focusing on events and places without sharing how they felt. However, he read a large number of letters written by soldiers and from those he was able to glean the true depth of emotion felt by a soldier in battle or even the tiresome experience of merely waiting, waiting, waiting.

I'll keep this one short, but I thought it was an excellent read and I'm only knocking off one point for the annoyance of phonetically-written dialogue. I just hate that. I'm on the side of author Muriel Spark, who claims the choice of wording will make the accent apparent and therefore spelling things as they sound rather than using their correct spelling is unnecessary. Go Muriel.

And, go Peyton. He's our boy. Well, sort of - I'm not a native, but I've lived in Mississippi long enough to pretend we claim him.

Coming up: A review of The African Queen. 4 classics down, 1 to go.

Superbowl thought: While watching the Colts coach put on his Superbowl cap, followed by the advertisement for Superbowl merchandise, I asked the spouse if they had a whole second set of hats ready in case the other team won. "Sure," he said. "Somewhere, there are a whole bunch of unopened boxes of T-shirts."

I just hope they don't end up in a landfill. Recycle, Superbowl people!